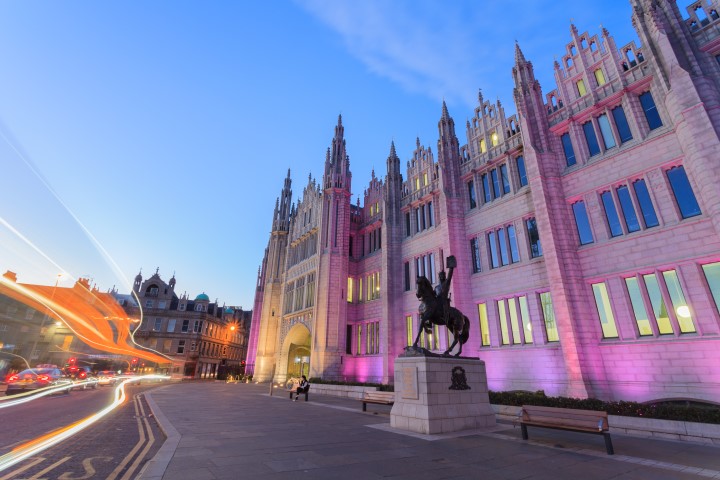 Aberdeen Etymology - Where Does the Name Aberdeen Come From?

“Mouth of the River Don'' is the meaning of the word “Aberdeen'' in Brythonic-Pictish language, the mother language of the Picts people who lived in eastern and northern Scotland in the Late British Iron Age and early medieval periods. With “Aber'' meaning “river mouth” and “Deen'' meaning “River Don”.

What is Aberdeen (UK) known for?

Why choose Student Accommodation in Aberdeen?

Aberdeen is known as one of the largest cities of Scotland and the oil capital of Europe. It is also famous for its grand architecture and large buildings constructed mostly of granite earning it the name of The Granite City. Aberdeen is also famous for its football team Aberdeen FC, a team that has won the third-most major honours amongst football teams in Scotland.

The overall climate of Aberdeen is warm and temperate with an average temperature of 8.3 °C. Heavy rainfall is present throughout the year, even in the driest months. April is considered the driest month in Aberdeen, while the heaviest rainfall happens in November. Being the warmest month of the year, July average temperature is around 14.1 °C. Make sure when booking your student accommodation in Aberdeen to ask if there are available heating systems.

Suppose you come from a tropical country, or any place near the equator where summers are 40-ish and the coldest winter days are 20-ish. In that case, you’ll probably need some heavy clothes for this one, rain boots and jackets are a must, thermals and scarfs will be essential for day to day wear, and you must invest in a heat preserving shoes. GMT is Aberdeen local timing, keep this in mind when booking your travels and student accommodation in Aberdeen.

Is Aberdeen Rural or Urban?

Aberdeen is mostly urban with a percentage of 93.4% and Aberdeenshire rural areas form around 13.4%. You will happily indulge in both sides of the city and enjoy the cohesion of ancient architecture with natural green scenery. Having your student accommodation in Aberdeen urban zone is a good choice for easier accessibility.

What are Some Must-Visit Places in Aberdeen?

Duthie Park and David Welch Winter Gardens, which currently hosts one of the most visited public plant collections is the perfect park you should check out, especially if you are into Botany.

Students can also enjoy various of the city's festivals throughout their stay including; True North music festival, Aberdeen Jazz Festival, and Dance Live Festival. Football fans can also enjoy watching games at the Pittodrie Stadium, where most of the famous games are held.

You will find Aberdeen’s Scottish cuisine orbiting around the lamp, bread, sausage, and gravies. Aberdeen Rowie or Aberdeen rolls are known for their buttery taste and flakey texture, Cullen Skink being a local speciality, is a thick soup made of smoked Finnan haddock, onions and potatoes. Lorne Sausage is another traditional delicacy, made of sliced sausage, beef, pork, or both, the funny thing about it is that it’s in the shape of a square! Scottish people are amazing!

Transportation means in Aberdeen are a lot, there are bus lanes everywhere in the city. The bus lanes are mostly operated by First Aberdeen, and cars are not allowed to move in the bus lanes and that eases the transportations. People who love walking can use the Walkit App to plan their directions in the city. Cycling is also one of the popular ways to move around the city. A group of volunteers called Aberdeen Cycle Forum managed to map a full cycling route of the city that is available on the city council’s website.