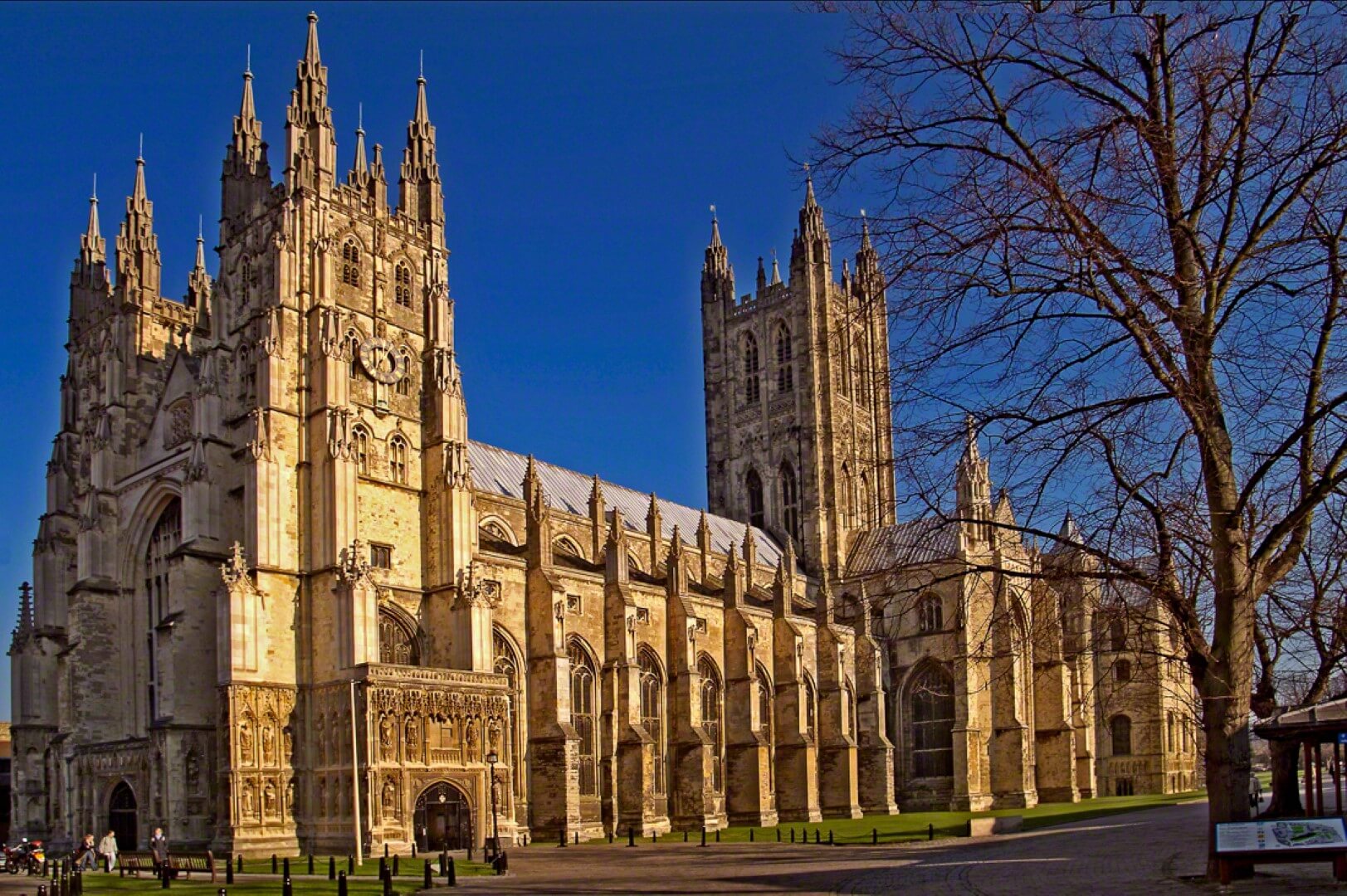 Canterbury Etymology - Where Does the Name Canterbury Come From?

Canterbury comes from an old English word “Cantware-buruh” which means “fortified town of the Kentish people” with “Cantware” meaning "the people of Kent" and “buruh” meaning “fortified town”.

What Is Canterbury Famous for?

Canterbury is about 60 miles away from London, thus an hour and a half by car and around 50 minutes using the underground; so, having your student accommodation in Canterbury will be quite the choice.

Why Book Student Accommodation in Canterbury?

Canterbury is one of the most famous tourist destinations in Kent.  The city’s main attractions include Westgate Towers, Canterbury Cathedral, Canterbury Roman Museum, St Augustine's Abbey’s ruins, and Marlowe Theatre. These attractions can be great weekend destinations for international students interested in arts and history. They should be on every student’s list of Canterbury things to do.

Altogether, Canterbury’s climate is warm and temperate with an average temperature of 10.2 °C, but from an equatorial perspective, Canterbury is definitely cold. February is the driest month in Canterbury, while November is the opposite, with heavy rain throughout the month. July is the warmest month of the year, with an average temperature of 17.1 °C. Make sure when booking your travelling tickets and student accommodation in Canterbury to ask for available heating systems.

You won’t be needing any drastic change in your wardrobe if you are used to cold weather. However, if you come from a country near the equator, you probably need to pack some heavy clothes like jackets, rain boots, scarfs, and thermals. Moreover, you must invest in heat preserving shoes. GMT is Canterbury local timing, keep this in mind when booking your travels and student accommodation in Canterbury.

Is Canterbury Rural or Urban?

Canterbury is mostly rural with a coastal flair thanks to Seasalter village, a village overlooking the River Swale. Enjoy the city’s stunning views with river canals and small boats delicately emerging from the city’s heart. The medieval architecture style is fully present wherever you go, which means you get to enjoy stunning greenery with a glimpse of the past, what an amazing place to be spending your school years in!

What are Some Must-Visit Places in Canterbury?

It has a very interesting roofed staircase leading up to King's School Hall, one of the world’s oldest schools. Founded in 600 AD, King's School Hall has spawned many infamous alumni like William Somerset Maugham and Christopher Marlowe.

An abbey is a monastery place where religious activities are practised under an abbot (male) governance or abbess (female). St Augustine's Abbey is one of the most famous English heritage sites in Canterbury, but unfortunately, it now sits in ruins right outside the city borders.

After centuries of being a royal castle for William the Conqueror, the castle became a prison, was abandoned for a while and it’s now closed till 2021.

A glimpse of Britain's Roman past can be found in this place where you can see a 2000-year old mosaic, a horde of silver and an interactive timeline that tracks the journey back in time from the original Roman settlement to the present-day Canterbury.

It was constructed in 1380 to be a defence line for the city’s key access points. The museum inside is now the main attraction as it showcases the site’s history during different times.

A boat trip is an aesthetically pleasing way to see Canterbury’s Medieval monuments along the riversides.

The Canterbury Tales is a book by the infamous poet Geoffrey Chaucer who chose the city to be the subject of his artwork. The place consists of animatronic tableaux with light and sound systems where the book’s stories and tales come to life in an enjoyable experience.

Exhibiting numerous masterpieces, including some of Van Dyck’s works, this is a must-visit for students. The theatre also offers children's educational programs and workshops.

A simple apple tart with apple and lemon filling and fresh apple slices as a garnish on the top. The tart is thought to be special as the recipe was originally written by Geoffrey Chaucer, The Canterbury Tales author.

Commonly known as “Kentish Pudding Pie” or “Kent Lent Pie”, this pie consists of rice pudding filling with a crust base; spices and lemons are added for an extra flavour. It’s not really a special kind of pie; however, the whole experience’s aesthetics can make the taste a whole different story.

This type of oysters are found only in the oyster beds in Whitstable, Kent. Whitstable now hosts an annual Festival where the local heritage of oysters farming is celebrated.

To get the most out of the weekend, you travel by High-Speed trains from Canterbury to London St Pancras International in 56 minutes. Across the city itself, Canterbury has two railway stations: Canterbury West and Canterbury East. Stagecoach in East Kent bus company runs local routes in the city and provides long-distance services. The company runs “Unibus” services from the city centre to the University of Kent, which makes it easier for students to travel to the university from the heart of the city centre.