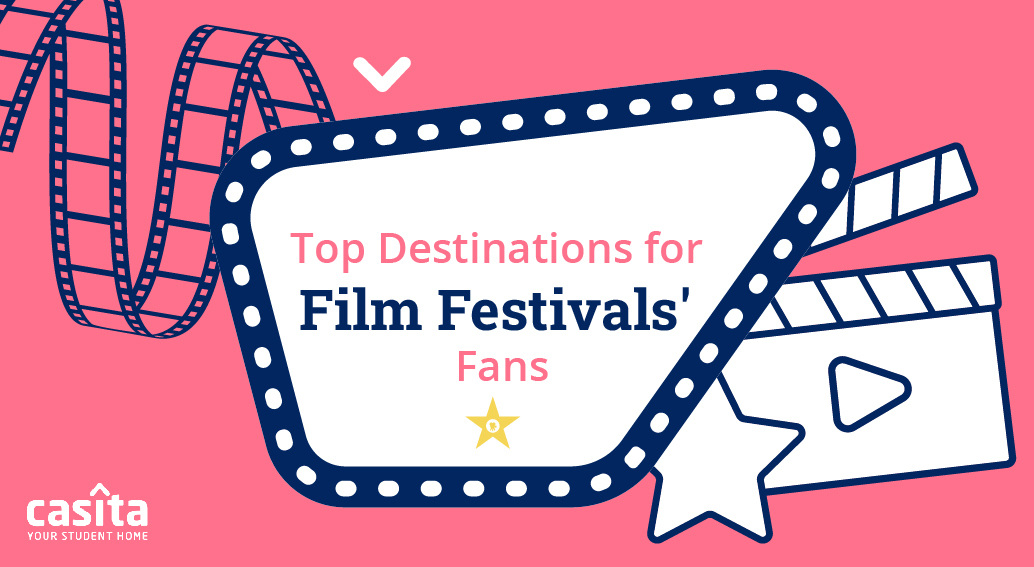 Wes Anderson, Bong Joon-ho, Greta Gerwig, and Ang Lee are all names that film festival fans know by heart and mostly aspire to be like. Several big names in the film industry got their start at different film institutions across the globe. Pursuing a film education, whether it’s directing, producing, editing, or script-writing, is not just about the institution you enrol in or the curriculum you’re taught, it’s also about the city you’re studying in. Cities often inspire film students to tap into their inner potential and express themselves freely and artistically. Cities like Cannes, Venice, and New York are the obvious choices, but we, at Casita, have compiled you a list of even more cities that bring the inspiration, the aesthetic, the film festival vibes, and most importantly, the high-quality education. Here are the top destinations for film festivals’ fans!

California is a beautiful city with stunning natural views that range from beaches and palm trees to hills and forests. Not only that, but it is a city known for its artistic status. Home to Hollywood, California seems like an obvious choice for students to pursue a high-quality film education and kickstart their filmmaking career. The city houses a number of world-renowned and top-rated film schools, including CalArts, Los Angeles Film School, USC School of Cinematic Arts, from which notable Hollywood names, George Lucas and Ron Howard graduated, the American Film Institute, which is where David Lynch and Darren Aronofksy received their film education, the University of California, Los Angeles, and the California Institute of the Arts that celebrates alumni like cinema’s celebrated figures, Tim Burton and Andrew Stanton.

New York City is yet another American city that is favoured by film students and film festivals’ fans. The city has plenty to offer in terms of diversity, culture, entertainment, and inspiration. New York is a destination that almost all film students can agree on. It is home to the internationally-recognized New York University’s Tisch School of the Arts, which houses the Kanbar Institute of Film and Television and from which filmmaking staples, Todd Phillips and Charlie Kaufman, got their film degrees, as well as Columbia University’s School of the Arts and New York Film Academy, all of which provide students with a stellar film and arts education. New York City is also home to the annual Tribeca Film Festival, which takes place every spring and showcases a diverse selection of film, episodes, talks, music, games, art, and immersive programming.

Also on film festivals’ fans’ list of ideal study destinations is the city of Toronto, which is home to the world-renowned Toronto Film School. The Toronto Film School is well established as one of the best film schools in Canada. With a wide curriculum covering everything from film and TV production to interior decorating, the Toronto Film School is a career-focused school with a strong commitment to providing practical industry knowledge. Programs at the Toronto Film School take between one and two years to complete and all students graduate with a diploma. The city also hosts the annual Toronto Film Festival (TIFF), which has been and still remains a famously talked about staple in film culture.

Another Canadian city that made the list is Vancouver. Located on the West Coast of British Columbia, Vancouver is one of the most ethnically diverse cities in the region and is known for its bustling arts, music, film, and theatre scenes. This city is an ideal destination for students looking to start their filmmaking career as it houses the famous and internationally recognized Vancouver Film School. The city is also home to the annual Vancouver International Film Festival, which takes place every year for a couple of weeks during the months of September and October.

The United Kingdom's capital and busy metropolis is also a favoured destination for students seeking film education. As a diverse city that houses people from different cultures and backgrounds, London is an ideal place for both local and international students that want to start their filmmaking career. London is a city where film students can acquire resources, filming equipment, and gear with ease, thus facilitating their study process and allowing them to apply what they learn in real world situations. The city is home to several well-regarded film institutes, including London Film School and the National Film and Television School. The BFI London Film Festival also takes place in London on an annual basis and features a diverse range of movies, documentaries, and short films.

Prague is a city of culture; it’s where artists go to flourish and develop. The city has rich film and theatre scenes. Students seeking high-quality film education often choose to study in Prague as it houses the renowned Academy of Performing Arts’ Film and TV School (FAMU), which provides both affordable and high-quality education that students favour. The city of Prague also hosts a number of annual film festivals with diverse lineups, including International Film Festival Prague, Prague Independent Film Festival, Prague Short Film Festival, and Made in Prague Film Festival.

France is generally seen as one of the birthplaces of film, this is why Paris is the ideal destination for filmmaking students to start their careers. Not only does it fit the aesthetic and satisfies the specific niche that film students often go for, but it’s also home to renowned film schools, several film festivals, and a flourishing film scene. Paris is a city of history, culture, a diverse population, and an appreciation for the arts. Film students often seek education at La Fémis, which is one of Paris’s well-established film institutions. Of the several film festivals and events that take place in Paris, you might find yourself drawn to the Paris International Film Festival, Champs-Élysées Film Festival, Paris Short Film Festival, and the South-East European Film Festival.

The polish city of Lodz makes it to the list as a film festivals’ fan favourite. This quaint European city is big on the arts, and supports filmmakers and students aspiring to make it big in the field. Lodz houses the world-renowned Lodz National Film School, which is where a number of famous Polish actors, directors, and filmmakers received their education. The city promises high-quality education, authentic cultural vibes, and an overall immersive learning and living environment.

Sydney is Australia’s culture capital. Home to the Sydney Opera House, this city sponsors the arts and provides a nurturing environment for artists, filmmakers, and overall talented individuals with skills to grow and showcase. The city has a diverse population and a welcoming atmosphere that encourages students to pursue an education and an eventual career there. Sydney is home to several universities and institutions that offer high-quality film education all year round, including summer programs; the Sydney Film School is one of the city’s most famous institutes in which students can enroll and go on to kickstart their filmmaking careers. The city also hosts an annual film festival: The Sydney Film Festival.

Edinburgh is a city that not only educates, but inspires filmmakers. Located in the heart of Scotland, Edinburgh’s natural scenery, its culture, and its history make it an ideal destination for film students aiming to set off their filmmaking career. The city supports the arts and is a rich environment for the film and theatre fans to flourish. Film students in Edinburgh either choose to attend  the Film Academy Edinburgh or Edinburgh College of Art, both of which offer quality film education. The city also hosts an annual film festival, Edinburgh International Film Festival, which showcases a number of films of different lengths for audience and critics to enjoy.

Italy is a great place to launch your filmmaking career. Pursuing a film education in any Italian city, especially Florence, allows you to enjoy flexible programs and mix the beauty of the city, its art, and its culture with your education and let them inspire and drive you forward. Florence is one of the most aesthetically beautiful cities whose atmosphere is very cinematic and allows for film students to express themselves, grow their talents, and unlock their full artistic potential. Florence University of the Arts is a great choice for pursuing a high-quality film education in the city, with flexible study programs, and summer study periods.

A surprise to many, but Germany is a great place to start studying film as well, even in English! As the capital, Berlin is a bustling city with the right vibe and atmosphere for film students to grow and flourish. The city of Berlin houses a number of universities and institutions that are dedicated to giving students a film education of high quality, including Macromedia University, the University of Europe for Applied Sciences, and the German Film and Television Academy Berlin (DFFB). The city’s status, its culture, history, and ever-growing artistic scene also inspires filmmakers to excel in their field and produce unique projects that are representative of their visions. The city also hosts an annual film festival, The Berlin International Film Festival, which is commonly referred to as Berlinale.

The city of Beijing also makes the list for a top destination for film festivals’ fans. This city with its ancient history that goes back almost three millennia, as well as its modern architecture, and vibrant culture serves as a great place to practice and study filmmaking. The city’s lively atmosphere inspires film students to learn and create; it is a great environment to nurture and showcase your unique talents, while getting access to equipment, studios, and shooting locations. The city houses Beijing Film Academy, which is a world-renowned institution offering top-tier film education. The Beijing International Film Festival is also held annually in the city and showcases a number of unique film projects.

Whatever your filmmaking passion is, whether it’s acting, directing, script-writing, or set design, you can find the perfect place to grow and nurture it. If big Hollywood names like Martin Scorsese, Lisa Cholodenko, George Lucas, and Joss Whedon can get their start in film school, so can you! There is an abundance of cities across the globe that would sponsor and support your film education and be aesthetic enough to inspire the artistic filmmaker in you, so pack your bags and set off to begin your journey, Hollywood awaits!

Classic Christmas Movies You Should Watch
Christmas nights at home need movies! Here is a list of the best movies to watch on Christmas!
Best On-Campus Halloween Movies to Watch
Watching horror movies on Netflix is one of the easiest ways of celebrating Halloween.
So what are you waiting for?
Let our accommodation experts guide you through the Explore, Discover, Secure process in order to find the most suitable room, close to your institution, within your budget and according to your needs.
Sign up for our newsletters so you can have the latest Student Accommodation News at your fingertips.
UK
London
Birmingham
Glasgow
Liverpool
Edinburgh
Manchester
See all cities
Australia
Sydney
Melbourne
Brisbane
Perth
Adelaide
Canberra
See all cities
USA
Charlottesville
New York
Fort Worth
Atlanta
Raleigh
New Orleans
See all cities
Casita
Become a Partner
Blog
News
Testimonials
Why Casita?
Accommodation
How it Works
Contact Us
Useful Links
About Us
Terms of Use
Privacy Policy
Sitemap
FAQs
Careers