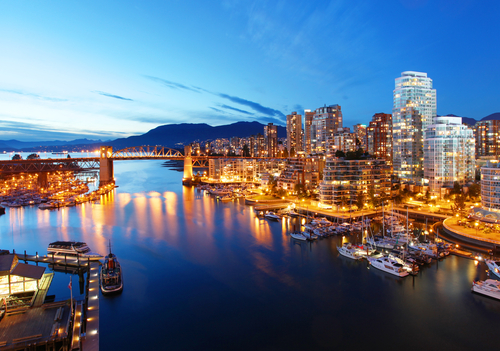 Vancouver Etymology - Where Does the Name Vancouver Come From?

The city was named after George Vancouver, who explored the city back in 1792 and gave British names to many of its areas. Vancouver as a family name is derived from a Dutch origin ‘van Coevorden’ meaning denoting someone from the city of Coevorden, Netherlands.

Vancouver is a port city located in the western part of Canada in the region of British Columbia and is the most populous city in it. It lies between Burrard Inlet and the Fraser River delta and is north of the state of Washington.

Vancouver is famous for many things, among them is being one of the most ethnically diverse cities in North America. With a British past looming in its corners along with an East Asian atmosphere and a large mix of nationalities, there will never be a dull moment in this city. Named after George Vancouver who discovered the area in 1792, Vancouver has it all; the snow-covered mountains, the glistening ocean, a lively art and music scene, and some of the best universities in Canada. Students from all over the world come to the city for high-quality education and there is a wide range of student accommodation in Vancouver to cater to their needs and comfort.

What to Pack and Vancouver Local Timing

Winters in Canada are quite cold. Pack what you feel convenient for your ability to adapt to cold weather. Jackets, coats, rain boots, and scarves are some of the daily essentials in wintertime. As for the summer, the maximum temperature is  18.2 °C | 64.7 °F, which makes it not as warm as a tropical country per se! GMT -7 is the local timing, try to keep it in mind while booking your travels and student accommodation in Vancouver.

Is Vancouver Rural or Urban?

Vancouver is not only urban, but also it’s a part of the metropolitan area in British Columbia, Canada.

What are Some Must-Visit Places in Vancouver?

There are plenty of things to do in your free time while you’re staying at your chosen student accommodation in Vancouver. The city is a heaven for those who enjoy the outdoors with activities like hiking, skiing, camping, kayaking, fishing, and mountain ziplining always available for you to enjoy.

If you’re looking to appreciate and enjoy nature, then Stanley Park is the perfect place. Its huge trees, gorgeous colours, aquarium, and outdoor pool in the summer made it one of the best places to visit in Vancouver.

If it’s art you want to admire then head over to Granville Island which is considered a hub for artists and also has the popular Granville Island Public Market selling fruit and vegetables, seafood, and so much more.

Get to know the city’s history at the Museum of Anthropology where you can admire native art and objects representing Asia, the Americas, Africa, and Europe.

Science World is a non-profit science centre, aims to root the next generation in their mother nature by science. Quite the place to have a getaway from school life a bit, and enjoy seeing the science behind things in a cool fun way.

You will not only enjoy the scenery of sculptures and fountains, but also you will have lawn bowling, tennis, basketball, and roller hockey. The park has an indoor tropical garden called ‘Bloedel Conservatory’. In addition to all of this, the park also has a wedding venue, ‘Celebration Pavilion’ where you can witness a happy couple reciting their vows on a random day of you just wanting some fresh air!

Don’t miss out on the oldest part of the city, Gastown, filled with shops, restaurants and restored Victorian buildings.

It is said to be the unofficial national comfort food of Canada. Poutine is made of french fries, topped with squeaky cheese and slathered with brown thick gravy.

A three-layered Canadian dessert bar. Crumble-wafer, custard-flavour butter icing, and chocolate at the top. Nanaimo is made with different flavours and options, from peanut butter, mint, to even dairy-free!

Salmon is the go-to food for both Canadian people and newcomers! It’s is a staple of Pacific Northwest Cuisine. If you are into cooking, you can buy salmon from any supermarket around. Usually, it’s packaged in a box made of cedar or bentwood.

Getting around in Vancouver has never been easier with the city providing all kinds of transportation to ensure a hassle-free commute for its citizens. It is a bike-friendly city with paths weaving through its streets and plenty of bike rental shops. The public transportation system in Vancouver is very accessible and practical. The Translink system includes the SkyTrain, the SeaBus ferry, and buses all at reasonable prices. You can check if your university has any special offers on transportation for its students like the UBC’s U-Pass Program. Make sure your choice of student accommodation in Vancouver is located near one or two transport links for fast and easy access to anywhere in the city.

Other Student Accommodation In Canada