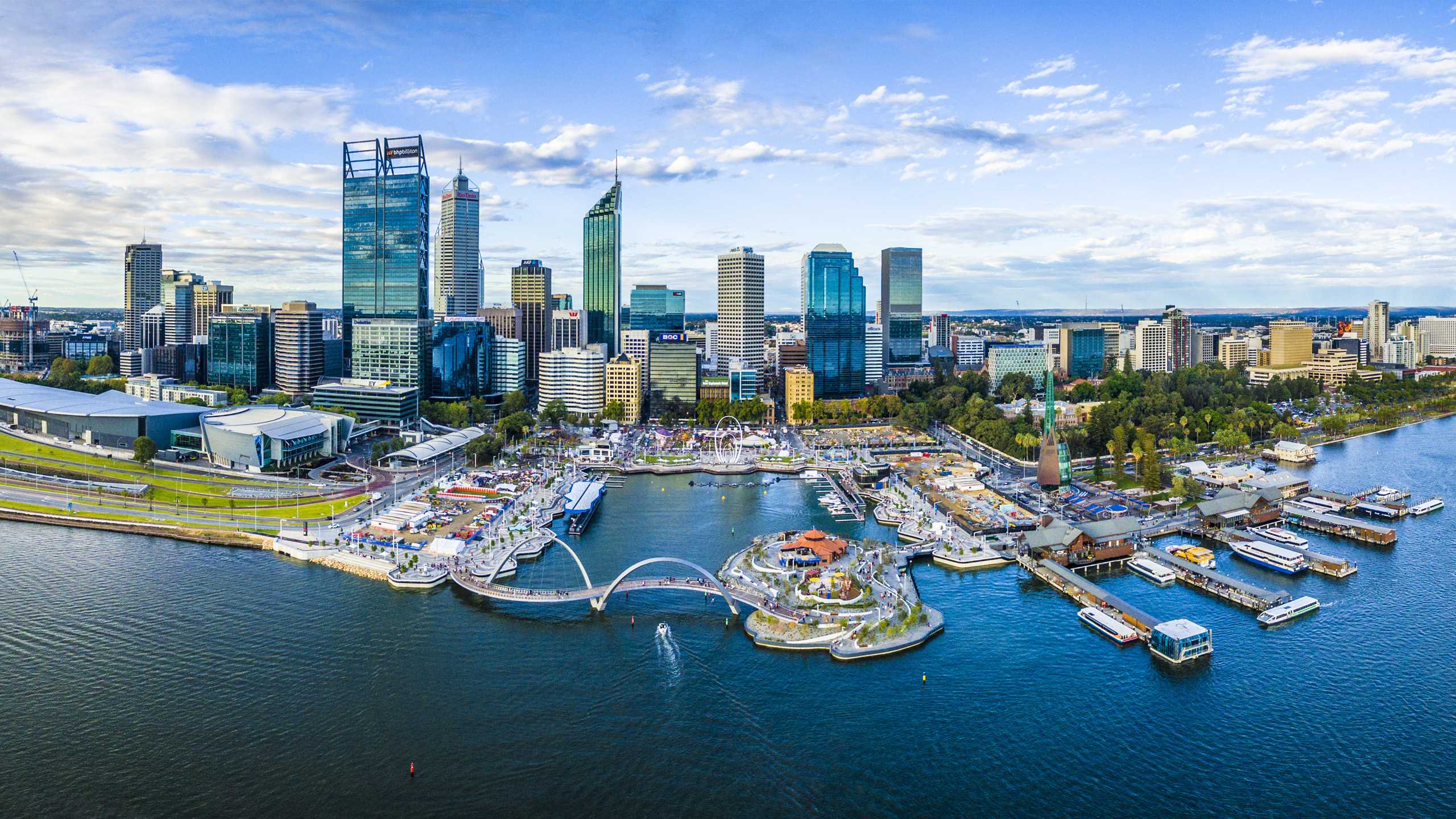 Perth Etymology - What does Perth mean?

The Australian city of Perth was named after the Scottish town with the same name by Captain James Stirling who founded the Australian city in 1829. It was to honour the wishes of Stirling's patron Sir George Murray who was born in the Scottish town. The name itself comes from the Pictish language, a Celtic language related to Welsh and Breton, and means “wood or copse of trees”.

Perth sits on the south-western region of Australia at the coast of the Indian Ocean with the city’s central business district situated on the Swan River. It consists of  30 local government areas and over 250 suburbs stretching from Two Rocks in the north to Singleton in the south, and east inland to The Lakes. Perth is just a two-hour flight from Adelaide, four hours to Sydney, and three and a half hours to Melbourne.

Perth has a hot-summer Mediterranean climate with mild winters. Summers start in December with hot, dry weather lasting to February with temperatures ranging from 17.5 - 30°C. Don’t worry though, the ‘Fremantle Doctor', an afternoon sea breeze will ease the heat. Autumn then follows in March all through May with cooler nights, occasional rainfall, and humidity. Autumn temperatures average between 13.7 - 26°C and rarely drop below 10°C. The cold weather begins with June accompanied by rainfall, storms, as well as thunderstorms. Spring brings the long cold nights to an end in September with temperatures ranging between 11.7 - 23°C, but the rain still sticks around.

What to Pack and Perth Local Timing

Most of the year witnesses warm weather so make sure you have some clothes to bear the heat. However, you should also be prepared for the cold winter mornings while heading to class so pack enough sweaters and a heavy coat. Don’t forget to also pack some rain boots and a waterproof jacket in case it rains while you’re out and about. It’s important to note that Perth follows Australian Western Standard Time (AWST), UTC +8 for when you’re making travel arrangements and booking your student accommodation in Perth. Unlike other Australian cities, Perth doesn’t observe daylight savings time.

What are Some Must-Visit Places in Perth?

History and architecture enthusiasts will love this landmark in Perth dating back to three centuries ago and built in a neo-Gothic style. St. Mary's Cathedral was consecrated in 1865 but witnessed many renovations since then. It’s the perfect place to take a break from the hustle of the city and admire its lights at night.

Overlooking Swan River and Darling Range, this is another place where you can enjoy peace and quiet in the arms of beautiful nature. Kings Park and Botanic Garden is considered one of the largest inner-city parks in the world. The botanic garden is mainly dedicated to preservation with a wide range of plants from Western Australia and other Mediterranean climates such as South Africa and California. The park is 1000-acres with two-thirds of it made up of completely natural bush where an array of native birds and plants live. Head over to the Kings Park War Memorial from some stunning city views as well as Fraser Avenue Lookout.

It’s almost always hot in Perth which means it’s always the perfect weather for a beach day! The city has multiple beaches where you can escape the scalding heat by taking a dip in some cool water. Cottesloe is the most popular beach in Perth for being just a 15-minute drive from the city centre as well as its pine trees and clear water. If you’re looking to ride some waves, head over to Trigg Point and Scarborough. If you want to explore the underwater world, Rottnest Island and Penguin Island are perfect spots for snorkelling.

Whether you love outdoor activities or just relaxing in front of a beautiful view, Perth’s Swan River can offer something for everyone. It’s believed by local Aboriginals that the river was created by the rainbow serpent, "Waugal”. There’s plenty to do by the river; you can have a picnic with your friends enjoying the fresh air, you can take a kayak boat or even take a dip in the clear water. There are dedicated lanes for biking and hiking as well if you want to get your blood pumping after a week of lectures. Foodies will also enjoy the area with its array of restaurants and cafes serving all kinds of delicious cuisines.

Animal lovers will love this zoo located just a short drive from the city with its amazing wildlife. Opened in 1898, Perth Zoo features unique exhibits like the Australian Bushwalk and Wetlands which depicts local wildlife. There you can cuddle with koalas, see kangaroos, wombats, and Tasmanian devils. You could even get to know the ecosystems of countries far away in the African Savannah with its giraffes, the Asian Rainforest with its orangutans, or at the South American primate exhibit with its elephant shows.

Popular breakfast food in Australia, Piklelets will steal your heart as their flavour explodes in your mouth for the first time. They are Aussie pancakes that are also around in Scotland and New Zealand. They’re not like any pancakes, their batter is much thicker, making them extra fluffy and heavy in flavour, and they are prepared with yeast, not baking powder. They are served with syrup, butter, or fruits as per your preference.

Nothing is more Australian than a good old meat pie, and Perth stands out with this traditional dish. It goes back all the way to the Neolithic period and used to be prepared by making barley, semolina, and grains into a paste then filled with honey and baked over hot coals. It was developed by the Greeks to be filled with meat, then arrived in Australia during the colonization period. Now, the delicious dish is made with a flaky pastry filled with gravy and minced meat and covered entirely with tasty tomato sauce. However, it has many variations where the meat pie floats over mouth-watering pea soup (pie floater).

Seafood in Perth is a huge point of popularity among locals and visitors alike for its freshest seafood and freshwater fishes. Barramundi, for example, is a type of Asian Seabass that is native to Australia that is usually served grilled with tasty crispy skin. Another seafood Perth is known for is the Western rock lobster, commonly known as crayfish. Even though it’s quite expensive, you should at least try it once while staying in student accommodation in Perth.

Forget about the commute hassle when having your student accommodation in Perth, with its highly extensive transportation system. Getting around in Perth whether to university, sightseeing, or just to browse through the city is easy and accessible through its network of buses, trains, and ferries. With a SmartRider card, you can even get discounts on fares after filling it with money ($10 minimum) to get the discounts with a daily maximum spend. Trains can also accept the SmartRider card and they’re a great way to visit the major tourist attractions in Perth.