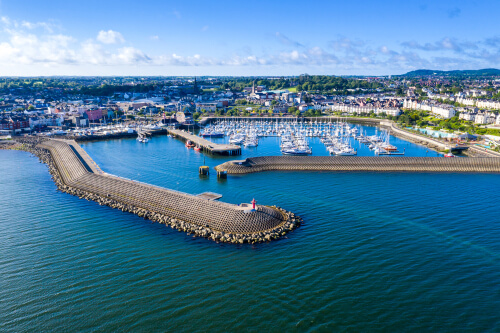 Bangor is the oldest city in Wales, and one of the smallest cities in the UK. Bangor, Gwynedd, is located on the coast of North Wales. Bangor is dubbed the Queen City, due to its magnificent location on the Penobscot River and the beauty of its buildings, reflected in the many student homes it hosts. Interestingly, Bangor is derived from bancor, an ancient Welsh word that translates to a wattle fence used for animal enclosures.

During the summer months, Bangor's temperatures can reach 31°C, so staying close to the coast can be a good idea because it will feel a bit cooler. August is the warmest time of year, although it is accompanied by a lot of rain, while January is the coldest with temperatures as low as 7°C. The sea highly influences the weather in North Wales.

Bangor is the oldest city in all of Wales. It was established in 1886 and was the only city in Wales until 1905 when Cardiff came along. The small city is rich in history; its popular cathedral site goes back to the 6th century AD, and there are various beautiful castles along the coast dating back to the 13th century AD.

Bangor University occupies a considerable part of Bangor and also has some departments in Wrexham. It is divided into five Colleges, and these are then broken down into Schools and Research Institutes. Bangor's Colleges are Arts and Humanities, Natural Sciences, Business, Law, Education and Social Sciences, Health and Behavioural Sciences, and Physical and Applied Sciences. The university offers many online services for each student through My Bangor app. The university also manages a Students' Union that provides services, support, activities and entertainment for students. All Bangor University students automatically become members of the Students' Union unless they choose not to.

There are many popular student attractions in Bangor that you'll enjoy in your free time. The city houses the Garth Pier, which is the second-longest pier in Wales, and the ninth longest in the British Isles. Walking along the pier is one of the best things to do in Bangor, Wales. The 'Bangor Pier' bus stop allows you to reach the pier with ease. The pier has 'Whistlestop on the Pier' restaurant in its middle, and 'Pier Pavillion Tea Room' at the very end to enjoy the Menai Strait view. Other landmarks are the Cathedral Church of St Deiniol, which is set in a sloping oval churchyard; Bangor Islamic Centre, as well as various shopping centres, supermarkets, cafes, and restaurants, such as Bangor Chinese takeaway, Bangor Tandori, and Ristorante Pulcinella by the pier. Bangor Golf Club and other green areas in Bangor's Beach road are perfect for outings and relaxing weekends.

The transportation system in Bangor is simple since bus stops are spread across the small city. Bangor railway station has 2 railway station bus stops nearby. Students will highly benefit from purchasing their Arriva bus pass for great student discounts on buses. The city is postulating routes 5, 8, and 85 of the National Cycle Network, which makes it easy to travel across the city by bike. Bangor is quite compact, so if students prefer walking, it's a great way to enjoy the city.

It is located on High Street, a 10-minute walk to Bangor University and Bangor International College. The train station is within a short stroll as well as multiple transport links.

It is just a 14-minute walk to Bangor University and an 11-minute bus ride to Bangor International College.

It is in the heart of Bangor, a 10-minute walk to Bangor University and Bangor International College. The train station is a mere 7 minutes walk away. You can take a morning jog or an evening stroll at the picturesque Snowdonia National Park, or hike with friends and soak in the sunshine.

It is located on High Street in the heart of Bangor, near various entertainment venues, like boating clubs, swimming pools, courts and pitches. It is a 10-minute walk from Bangor University, Bangor train station, supermarkets, and shops.

It is in the heart of Bangor, just a 5-minute stroll from Bangor University and a 10-minute walk from Bangor Train Station.  Menai Strait is only a short ride away from the building.

It is only a 6-minute ride to Bangor International College and a 5-minute walk to Bangor University. The bus stop is just across the accommodation to connect you with all areas of the city.