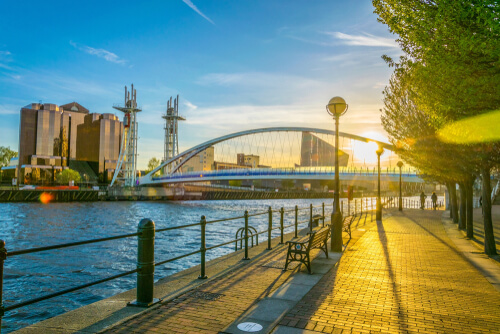 Salford Etymology - Where Does the Name Salford Come From?

Salford is located on the west of Greater Manchester and on the north of the UK. The location makes the climate colder than other parts of the UK. Salford is a four-hour ride to London with a total distance of 215.4 mi/346km.

Why Book a Student Accommodation in Salford?

With over 200 languages spoken in Greater Manchester, Salford is a famous district in the UK. Its student community is known for its diversity, as there are hundreds of international students in the city. The history of the city dates back to 1360 when the city became a pioneer in domestic textile production. With the beginning of the 18th century, Salford topped the world in cottage industries giving way to factory production. Moreover, the Ordsall Hall is a former manor house that has been standing up since 1350 and is considered the landmark of the city.

Winter in Salford ranges from 7°C to 10°C and summer ranges from 18° to 20°C. July is the warmest, January is the coldest and precipitation is at its highest during December, while April holds the lowest. For an international student coming from a tropical atmosphere, Salford can be quite cold.

What to Pack and Salford Local Timing

Since Salford is a cold city, you should be aware that you might need extra heavy clothes. Jackets, coats, thermals and scarfs are all daily essentials. Rain gear is a must and heat preserving shoes can be quite handy. GMT is Salford local timing; keep this detail in mind when booking your travels and student accommodation in Salford.

Is Salford Rural or Urban?

Being a city of Greater Manchester, Salford is considered to be urban.

What are Some Must-Visit Places in Salford?

If you are a lover of nature, you will get to explore real-life nature browsing through the land in Salford. Explore the rural life in the city with a walk through The Salford Trail, a must-visit attraction in Salford. It is a route of green spaces extending more than 80 kilometres. Salford Trail starts from the cityscape of Salford Quays through rivers, canals, parks and moss lands. Additionally, Salford has rich material and attractions for art lovers. Salford Museum & Art Gallery is a must-visit as it hosts artefacts that represent the history of Salford and Victorian art . Additionally, Salford Arts Theatre is where you should go if you love attending distinguished plays.

Salford offers reliable transport links within Greater Manchester. It is connected easily with other areas in the county through numerous and affordable transport options for students. Bus routes cover the whole city and they leave every 1-5 minutes from the universities and multiple other stations. Additionally, there are many subway stations going to and from all universities. If you are a light traveller, bike routes are available also to help you use your bike around.