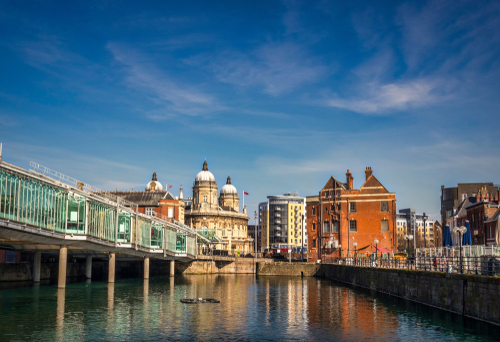 Hull Etymology - Where Does the Name Hull Come From?

It has two origins, a Scottish one which means a “hill” and an Old English one coming from “howling” which is the noise that the nearby river makes; the river itself is called Hull. It was initially named Wyke under the hamlet of Myton, then it was required by King Edward I who renamed it, Hull, in 1299. The name is believed to have come either from a Scandinavian word Vik that means inlet or a word from Saxon Wic which means dwelling place or 'refuge'.

What Is Hull famous for?

It's around four hours from Hull to London by car ride, give or take ten minutes. Using the underground, you’ll be saving almost a full hour, with only three hours from Hull station to London King's Cross station.

Why Book Student Accommodation in Hull?

The small city of Hull in Yorkshire - also known as Kingston upon Hull - has more to it than what meets the eye. It was named the UK's Capital of Culture in 2017. The city is home to multiple highly-acclaimed universities that attract international students from all over the world. Hull is a port city in East Yorkshire situated in the Humber Estuary next to the famous Humber Bridge. It's only 200 miles from Edinburgh and London, 100 miles from Manchester, and an hour's drive to York and Leeds.

Hull is one of the most popular student destinations in the UK for its academic excellence. The University of Hull is one of the best universities in Hull and has the Hull York Medical School in cooperation with the University of York. Hull College is another highly-acclaimed educational institution that provides further and higher education courses. ONCAMPUS Hull, Wyke Sixth Form College, and Hymers College are also some of the high-quality institutions in the city.

The influence of the Gulf Stream makes the city have a mild latitude, but the weather is usually very changeable from one day to another. It's sunnier and drier than areas in the British Isles, but it's colder in the winter than inland areas, so make sure you have your heavy jacket and socks. The warmest months are typically July and August where the temperature reaches 16.2 °C | 61.2 °F, while the coldest month is January where there could be an occurrence of snow and the temperature could reach 4.8 °C | 40.6 °F.

What to Pack and Hull Local Timing

Hull is cold, so pack your cold-weather essentials. Coats, jackets, scarfs, thermals, earmuffs, rain gear, heat preserving shoes, wool padded gloves, and some snuggies will be smart choices. GMT is Hull’s local timing so you should keep this in mind when booking your travels and student accommodation in Hull.

Is Hull Rural or Urban?

Hull is considered the biggest urban area within the Humber Ports. Combining beach life with a flare of architectural splendor.

What are Some Must-Visit Places in Hull?

The city of Hull doesn't fail to impress those who visit with its charming landmarks and fun activities. The Hull Maritime Museum and the Museum Quarter is one of the most famous places in Hull and it’s a must-visit! It depicts the city's history and culture with paintings, models, and equipment. If you want to extend your historical exploration of the city, then don't miss out on the Historic High Street and Wilberforce House with its 18th and 19th centuries exhibits. Taking a stroll on the iconic Humber Bridge, the second-longest suspension bridge in the world, is a great way to enjoy a sunny afternoon and some great views. Another place you shouldn't skip visiting is "The Deep" which is an aquarium designed in the shape of a submarine with 33 feet of it buried underground. The Holy Trinity Church is one of the most important landmarks in Hull and it is considered the largest parish church in the UK according to Guinness World Records. If you feel like appreciating nature, East Park is the perfect place for a picnic and you can visit the animal compound with deer, wallabies, rheas, and peacocks.

The transport system in Hull is extensive and gives you easy access to anywhere you want to go. You can make daily journeys to places in Europe using the cruise liners and take one of the Hull trains to get you to the capital in no time. The Paragon Interchange includes both buses and trains that will take you anywhere in the UK. If you're at Hull University, click here to know the latest offers for students on transport.