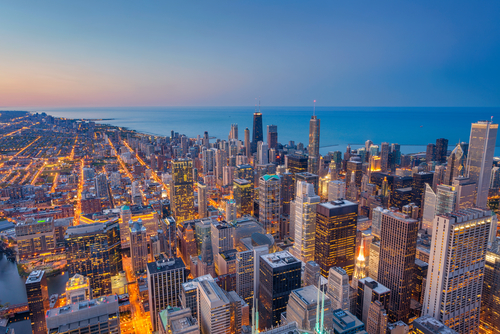 Chicago, Illinois is commonly known as “the windy city” for the frigid breezes coming from Lake Michigan sweeping through the city. It is the third-largest city in America, and the third populous as well. Chicago’s name origin comes from a Native American word meaning strong or great, and the city truly lives up to it. When you hear the word Chicago, things like jazz music, Chicagoan style pizza and hot dogs, and 1920s gangster movies come to mind. You’ll definitely enjoy the array of cultures that can be found in its lively streets, making you feel like parts of the world are just around the corner. Chicago is also considered a popular destination for international students since it has some of the greatest academic institutions in the country along with its natural charm.

Chicago’s location is considered ideal as it sits on the Saint Lawrence Seaway continental divide that connects the Mississippi River and the Great Lakes. It lies in northern Illinois, at the southwest of Lake Michigan.

The climate in Chicago is generally characterized by warm summers and cold, windy winters. Humidity and cloudiness are quite frequent, and the temperature averages between 26°C – 33°C. To prepare for the Chicago winter, invest in some wool socks, a long heavy jacket, and boots that can survive walking in the snow, slush, and salt.

Chicago is made up of 77 neighbourhoods, each one with its own unique style and charisma. Culture from all around the world is showcased in restaurants, shops, religious places, and the people themselves. There are many free activities to do in Chicago that will make you feel more connected to the city. A walk through the famous Millennium Park with the many selfie-sites is one of the most popular student activities in Chicago. Marvel at the magnificent natural history at the Museum on campus holding three great museums; the Field Museum with dinosaurs and mummies, The Shedd Aquarium with multiple colourful fishes, and the Adler Planetarium telling amazing stories about space. Make sure you experience sailing in the Chicago River, the only river in the world flowing backwards! Don’t miss out on experiencing a night of Chicago-style pizza and a live jazz-blues show.

Higher education in Chicago always attracts students from not just around the country, but from around the world as well. The University of Chicago is a world-renowned university and includes an undergraduate college, four graduate divisions, and six graduate professional schools. Roosevelt University is also one of the top universities in Chicago, offering undergraduate studies, master’s degree programs, and doctoral programs. Another acclaimed university in Chicago is the University of Illinois with 15 colleges and around twenty-five thousand enrollments.

Chicago’s transport system is one of the easiest and most extensive in the country. The city is considered the rail transportation hub in America for having the trusty Amtrak that connects plenty of cities and towns together. The most popular means of public transportation in Chicago is what is known as ‘The El” with eight lines operated by Chicago Transit Authority (CTA) as well as 129 bus lines. Many colleges offer U-Pass, getting unlimited CTA train and bus rides with major discounts using your University ID. Chicago is considered a bicycle-friendly city with its bike-sharing program, lanes and parking spots.