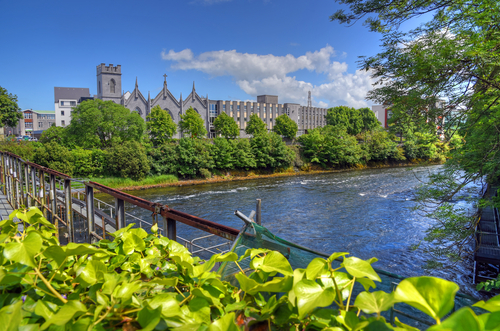 Galway is a city with so much heart and soul that it will leave you breathless. It’s referred to as the ‘Cultural Heart of Ireland’ for its historical richness, traditional music, exciting races, and vibrant festivals. It’s also known as “The City of Tribes” after the fourteen families who led the city’s economy during the Hiberno-Norman period. The town is most famous for its Galway Arts Festival where a known art group named Macnas throw a fantastic parade. This is one of the few cities in Ireland where you’ll hear the Irish language being spoken.

Galway is located on Ireland’s west coast where the River Corrib meets the Atlantic Ocean. Its Wild Atlantic Way coastline is one of the most scenic ones in the world. The weather in the city is changeable but is characterized by constant rainfall, so make sure you have your umbrella and rain boots. The temperatures are usually not too extreme, and the climate is mostly mild and moist. July and August are the warmest months in Galway with an average of 14 to 16 °C while the coldest months are January and February with an average of 4 and 7 °C. You’ll need lots of heavy clothes and jackets to get through the winters.

There are so many places to visit in Galway that’ll make you fall in love with the city. The city’s centre is Eyre Square dating back to the 18th century and full of an abundance of shops and traditional live Irish folk music. It also has authentic cafes, chic boutiques, medieval city walls, a Quincentennial Fountain depicting Galway’s traditional sailboat. If you’re looking for classic Ireland, head over to Latin Quarter where you’ll find traditional arts, crafts and knitwear as well as entertaining street performers. Galway Cathedral is an essential landmark in Galway with a mix of Gothic, Roman, and Renaissance architectural styles. Explore the city’s history at the Galway City Museum and the Spanish Arch. Add Lynch’s Castle to your historical tour as well as Dunguaire Castle, which is the most photographed castle in Ireland. If you’re looking for some summer fun, make sure to visit some of the best beaches in Galway; Salthill beach, Silver beach, Strand beach, and Kilmurvey beach.

If you’re thinking about living in a student home in Ireland, Galway is a more moderately priced city than Dublin and has great university options. The National University of Ireland Galway is a great choice and has excellent academic programs in Arts, Science, Commerce, Engineering, Medicine & Health Sciences, and Law. Other great options are Galway Community College Further Education, Galway-Mayo Institute of Technology, and Mercy College Galway.

Galway has a bus service just for university students! It has routes all over the city and between campuses. The city is also bicycle-friendly, so you’ll find cycle roads, repair shops and everything you might need to cycle your way through the city. You can also get around using the train or the city bus service.