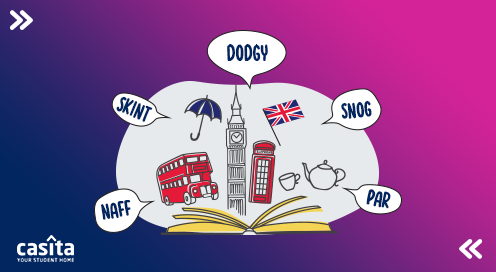 Depending on where you are studying in the UK, you will be exposed to different dialects of the English language. English slang words vary from one country to another and even from one dialect to another within the same country. There are plenty of awesome British slang words that are widely used. Here, we are introducing you to the slang words you need to know before travelling to the UK.

How to Learn British Slang?

As an international student in the UK, it is essential that you familiarise yourself with some of the most common slang words used among natives and locals in the UK> UK slang is slightly different from American or Australian slang, and here are a couple of ways you can easily learn UK slang!

Seeing or hearing the language, with its unique set of slang words, is an important and effective method of learning the language. You can use a variety of sources that would help you get acquainted with the language, and more importantly, the slang that you’re likely to hear on a day-to-day basis. Slang is dynamic and heavily relies on time, meaning it could change from one decade to the next. This is why you need to consume modern British media to get acquainted with recent slang, this media could be shows, movies, music, books, or podcasts. Exposure is key!

We live in the digital age, where everything you want to know or learn about is within reach on the internet. If you want to learn proper UK slang, you’ll definitely find a YouTube tutorial for it or a podcast that takes you through decades of evolving British slang, or even e-books on the subject.

Consulting a local may also be an ideal way to go about familiarising yourself with the lingo and slang in the UK. Once enrolled in a university or institution, you can ask fellow British students for help, make a game out of it, and learn new words every day in between classes. You’ll probably be an expert by the end of the semester!

After familiarising yourself with the lingo, you need to implement it to make sure you got everything right. A great way to do that is through quizzes! Only quizzes are always fun, you can test your knowledge of UK slang by taking a couple of quizzes and comparing results with friends. You can also always strike up conversations with your British friends and let them test you!

Popular Slang Words in the UK

Below are some of the most popular UK slang words that you’ll probably hear on the daily, whether on campus, in the tube, at the grocery store, or simply just overhear them on the street.

This is one of the most popular slang words among students. Students mostly refer to their university and/or college by just saying uni.

Another university-related cool British slang word is fresher which means a first-year student.

This is the British university slang word for a library.

The next time you are sitting on a bench and a British friend comes over asking you to budge up, you better know what it means! You should move or make room for them to sit next to you.

Mate is a term of endearment that is often used to call a university friend that could be either male or female. A male friend can also be called a lad or chap and the female version of this is lass or lassie.

After a long university day, being knackered, which is one of the most popular British English slang words and phrases, simply means being exhausted.

Dynamite is used for awesome and cool. Wicked too is used to convey the same meaning.

Ace is a British slang term meaning excellent. It is mostly used in Liverpool. In the rest of the UK, Brits use the term “Brilliant”.

People mostly use the word “Cheers” when toasting drinks, but British people also use it to say thank you.

This is to be devastated or saddened.

This one is used to refer to someone who is a fool, while Daft means some behaviour or action is foolish or stupid.

If your friend is being cheeky, he is being disrespectful or blatantly rude. However, it is usually used in a funny or endearing manner. It is tongue-in-cheek means it is sarcastic.

This one means illegal, unreliable, or suspicious. Pork Pies is a synonym for lies and the expression “Porkies” is another way of saying lies.

This one means to chat and to haggle is to negotiate.

When someone loses the plot, it means that he has become irrational and acting ridiculously and in other contexts, it means someone has gone crazy. A nutter is a crazy person.

This one basically means to be knowledgeable.

Skive off means to be lazy or a procrastinator. Kip is the slang word for a nap and faffing is to waste time.

Jimjams is another term for “pyjamas” and the television is referred to as Telly.

If someone refers to food as scrummy, it means that it is mouthwatering and utterly delicious. Bangers are used for sausages, chips word is for French Fries, and Nosh is for food.

British slang words for money include Dosh, Wonga, dough, dollar, and bread. A tenner is £10, a fiver is £5, and a quid is sterling £. A tad is another way to say “just a little” or “slightly.”

Nippy weather is used to describe cold or chilly weather and when a Briti says “It's monkeys outside,” they mean that it is very cold outside. Brass Monkeys is used for the same purpose, to refer to extremely cold weather.

Loo is considered one of the fancy British words meaning toilet. Bog Roll means toilet paper. Spending a penny means going to the bathroom, so if your flatmate mentioned this, don't think he needs to borrow money.

One of the popular slang terms in 2020 is to cap, which means to lie. If you are not sure your friend is telling the truth, you can simply send a baseball cap to them, and they will understand.

Bants is an abbreviation of banter. Banter means to joke or to exchange witty remarks with others.

When someone is chuffed, they are very pleased or happy about something.

Cuppa comes from the phrase “cup of.” The implied meaning is a cup of tea.

This is a shortening of the word legend and is often used to describe someone who did something incredibly cool or awesome.

Funny Canadian Slang You Need to Know As a Student
As an international student, if you want to immerse yourself in your new home, get to know these popular Canadian slang words.
So what are you waiting for?
Let our accommodation experts guide you through the Explore, Discover, Secure process in order to find the most suitable room, close to your institution, within your budget and according to your needs.
Sign up for our newsletters so you can have the latest Student Accommodation News at your fingertips.
UK
London
Birmingham
Glasgow
Liverpool
Edinburgh
Manchester
See all cities
Australia
Sydney
Melbourne
Brisbane
Perth
Adelaide
Canberra
See all cities
USA
Charlottesville
New York
Fort Worth
Atlanta
Raleigh
New Orleans
See all cities
Casita
Become a Partner
Blog
News
Testimonials
Why Casita?
Accommodation
How it Works
Contact Us
Useful Links
About Us
Terms of Use
Privacy Policy
Sitemap
FAQs
Careers