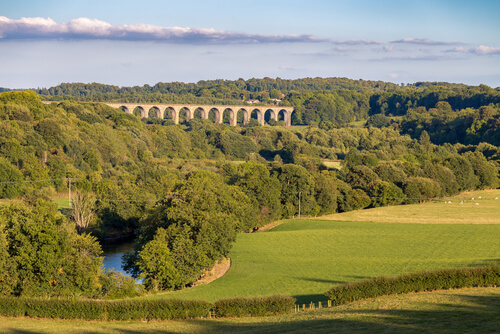 Wrexham Etymology - Where Does the Name Wrexham Come From?

As most of the UK cities named after a nearby river or even derived from its name, Wrexham’s name is derived from Old English “Wryhtel hamm” which means “water meadow”.

What Wrexham Is famous for?

It takes around three and a half hours to get to London from Wrexham by car with a total distance of 200.6 mi/322km. When using the underground, it will take you around 3 hours, give or take 15 minutes, from Wrexham General to Euston.

Why Book Student Accommodation in Wrexham?

Wrexham is the fourth-largest urban area in Wales with a population of 61,603 and it’s situated north of Wales with various mountains and hills nearby. It is located on relatively flat land between the lower Dee Valley and the mountains of North Wales. Although it is not built on a major river, three small rivers flow through parts of the town: the Clywedog, Gwenfro, and Alyn.

Wrexham grew as a market town and an industrial hub throughout the years which resulted in the immense growth of educational institutions. Wrexham Glyndwr University is the primary university of the town. It is a newly established university that was founded in 2008. It is well-known for The Wall Recording Studio which operates on its Plas Coch Campus.

What to Pack and Wrexham Local Timing

Pack the basics for any cold weathered place such as rain gear, jackets, coats, scarfs, thermals, gloves, wool caps, and heat preserving shoes. GMT is Wrexham’s local timing so you need to keep this in mind when booking your travels and student accommodation in Wrexham.

Is Wrexham Rural or Urban?

Wrexham is urban, surrounded by rural and agricultural areas to the southeast.

What are Some Must-Visit Places in Wrexham?

Wrexham has various places you can visit. The Valley Crucis Abbey is a must-see attraction; it holds the remains of the thirteenth-century abbey which represents the austere life experienced by the priests in this cultural asset. St. Mary’s Cathedral is another popular place to visit; it’s located on Regent Street and it’s the main church of the Diocese of Wrexham. It was built in 1857 at the height of the Gothic Revival and became the house of the Bishop of Menevia from 1898 to 1987. It’s also the home of the relic of Saint Richard Gwyn, Wrexham's patron saint.

Additionally, there are various festivals in Wrexham. Focus Wales is an international new music festival held in September yearly with more than 200 bands. It hosts screenings for some indie cinema movies and multiple exhibitions with food stalls and artisan crafts.

Transportation in Wrexham is easily accessible. A new bus terminal was recently constructed and it serves local, regional, and long-distance bus services. It is served by various bus companies, including Arriva Buses Wales and Stagecoach. Moreover, Wrexham has four railway stations to help you get around easily. These stations are Wrexham General, Wrexham Central, Gwersyllt, and Ruabon station.