A Guide to Weather & Seasons in Australia

The weather in Australia is generally very bright and warm. Studies suggest that UV exposure might lower blood pressure, curb appetite, and reduce the risk of obesity. Sunshine may even be linked to longevity. Australia receives more than 3,000 hours of sunshine a year, so get ready!

If you're looking for a breakdown of the Australian academic year, here's your guide: Breaking Down the Academic Year in Australia.

Since Australia is part of the southern hemisphere, its seasons will be opposite to what you're used to. It's a multicultural country, and as a student studying there, you'll be surrounded by students of all backgrounds from different countries, all confused about Australia's weather, so here it is in a nutshell:

Summer in Australia is from December to February. These are the three hottest months of the year. Summers are extremely hot, with serious downpours. In southern Australia, including Adelaide and Melbourne, summer temperatures are scorching. If going to the beach is your thing, summer is perfect because it's warm. You might even want to participate in some student water sports that are available in the country. You'll be relaxing on the beach while many in Wales are wearing winter coats.

Autumn in Australia is from March to May, with 13°C as the average temperature. You get to witness the country changing its colors from lush green to vibrant hues of orange, red, and gold. As the temperatures cool in autumn, it's the best time to plan your skiing trips. There are lower levels of rainfall during this time of the year in Australia, so it's still warm but a bit mild and with not much humidity.

If you need to book your Autumn tours & trips in Australia beforehand, make sure you have got an ongoing student bank account in Australia.

Make sure to have an extra jacket with you if you're going out and get some stylish scarves too. The wind is relatively strong in Autumn in Australia. 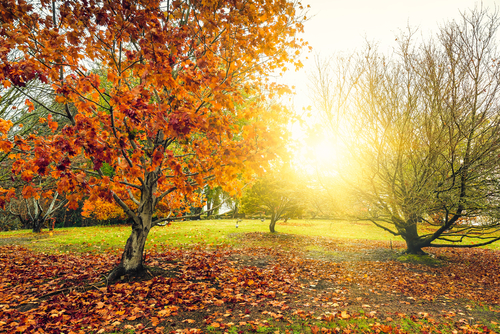 When is the End of Daylight Saving Time in Australia?

Winter in Australia is from June to August, with 5°C as the average lowest temperature. Considering that it's mostly sunny all year round, it might surprise you that a white winter is pretty typical in Australia. If you don't like the cold, winter is the ideal time to visit the north. You'll have more warm days and cooler evenings, which is ideal for getting outdoors and exploring the breathtaking natural landscapes of the region. Parts of Australia, like Victoria, Tasmania, and South Australia, can dip to 0 Celsius at night.

If you're studying in these states/territories, make sure to pack heavy jackets and extra warming undergarments. If you're in warmer regions, the usual Autumn clothes will do.

Spring in Australia is from September to November, marking the beginning of Australia's sunny days and cool nights. The temperature ranges from 15 to 23°C. Spring weather is similar to autumn one, and the charm is when the green continent begins to restore its bright colors bit by bit. No wonder it's the time of the year when koala and kangaroo joeys begin to venture out of their mothers' pouches for the first time. And you should too!

In northern Australia, the seasons are appropriately divided into two: the wet and the dry seasons. The wet season is from November to April. It's characterized by scorching days, high humidity, monsoonal rains, and probable cyclones. The dry one is from May to October. It's mostly with clear blue skies, warm days and cool nights.

So generally speaking, there are four seasons across most of the country and a wet and dry season in the tropical north.