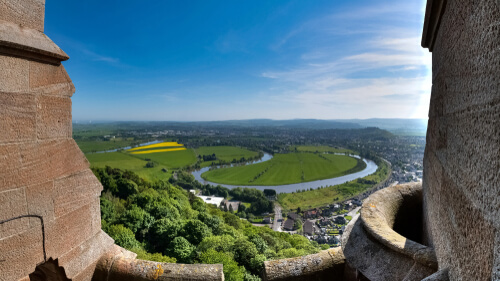 Stirling Etymology - Where Did the Word Sterling Come From?

It’s said to be of a Scots or Gaelic origin which means “place of battle”, others say it means “stream-pool”. However, the exact meaning is not really known till the present time!

What is Stirling Scotland Known for?

Stirling Location - How do you get to Stirling from London?

Stirling is around seven hours away from London by car ride and approximately six hours by the underground from Stirling station to Euston station.

Why Book Student Accommodation in Stirling?

Stirling is a city full of historical attractions, stunning architecture, and shopping destinations. It is an essential bridge between the north and the west sides of Scotland due to its central location, only 26 miles away from Glasgow and 40 miles away from Edinburgh.

Stirling has a lot of festivals; bloody Scotland is one of the most famous festivals there. Regardless of its name, the festival is not a scary festival, but a writing event for mystery lovers. It usually hosts conferences and workshops organized by famous writers to help aspiring writers in their journey towards success. Other festivals include Forth Valley Food Festival which is a local festival meant to celebrate local food producers, providers, and processors. The Callander Jazz and Blues Music Festival is another festival worth checking out for music lovers.

Stirling weather is warm and temperate; however, if you’re not familiar with the European climate, Stirling is going to be cold. The average temperature is 8.5 °C, rainfall is present throughout the year with April having the least amount of rain and January being the heaviest and the coldest at the same time. July holds the highest temperature of all months, with an average of 14.9 °C.

What to Pack and Stirling Local Timing

Pack what you usually pack for anywhere cold such as rain boots, jackets, thermals, wool padded gloves, heat preserving shoes, scarfs, and wool caps. GMT is Stirling’s local timing so you should keep it in mind when booking your travels and student accommodation in Stirling.

Is Stirling Rural or Urban?

Being part of Scotland, on which its economy depends mainly on agricultural production, Stirling is considered to be rural despite having a lot of urban attributes.

What are Some Must-Visit Places in Stirling?

There are various things you can do while living in Stirling. You can visit the stunning Stirling Castle where you can take a look at the beautiful views of the countryside and walk around the historical Regimental Museum inside. Furthermore, you can visit the Church of the Holy Rude which was built in the 12th century; it is the second oldest building in the city with splendid views thanks to its location on the highest hill in the area.

Other attractions you can check out in Stirling include the Dollar Museum and the Old Town Jail which is a historic jail that tells the history of crime in the Royal Burgh of Stirling. Art lovers can check out the Smith Art Gallery and Museum; it is a fascinating, elegant, and stylish gallery that exhibits various portraits for notable figures like Bonnie Prince Charlie, William Wallace, etc. It also houses a cafe so you can take a break and relax.

Transportation in Stirling is easy to find. The city is well-serviced by various bus routes and there are two main bus stations in Murray Place which is just a short walk from the city centre. Scotrail is the main railway operator serving the area and it easily connects Stirling to the rest of Scotland.

What train line is Stirling on?

Caledonian Railway mainline is the train line Stirling is on.

Edinburgh Airport is the closest airport to Stirling with a 29 miles (47km) distance.