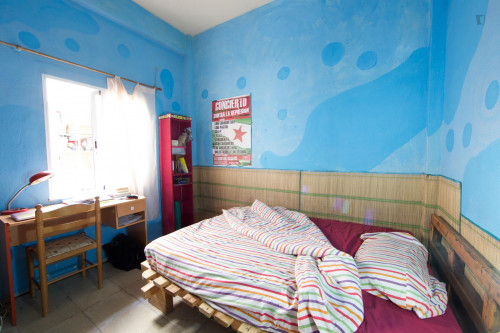 Cordova, sometimes written as Córdoba, stands out from most cities in Spain thanks to its interesting mix of ancient Roman, Moorish, and Spanish culture. Like Seville and Granada, the other two cities in the region, Cordova embodies the region's rich cultural and religious history. This shows in the city’s most iconic feature, the Mezquita, which is, in fact, a mosque with a cathedral inside it. It dates from Cordova's zenith, as the capital of Al-Andalus and the largest and most important city in Western Europe, with 500,000 inhabitants.

During its hugely prosperous and successful Moorish Caliphate era (766-1031), Cordova was a great cultural, political, financial, and literary centre; it had the largest library in the world. Exploring the tree-lined historical and Jewish quarters on foot is one of the best ways to find beautiful patios and alleyways.

Why Book Student Accommodation in Cordova?

The joys of living in Cordova come down to affordability, great weather, convenient location, and a chilled-out way of life. Mesmerizing history is everywhere you look but the city’s infrastructure is impressively modern, including reliable 4G Wi-Fi throughout the city. Cordova manages to provide just about every 21st-century convenience you might need without sacrificing its ageless traditions, serene pace, and old-world charm.

Besides that, university life in Cordova is very pleasant. The good weather, the friendliness of the city’s inhabitants, and the large number of students in the city has made the student atmosphere perfect for international students and young people in general.

Is Cordova affordable for international students?

Cordova can be very affordable. The average cost of living for a student is around €500 per month, however, leisure activities or your rental can make this amount vary. Cordova sometimes offers discounts for its students, this can help you spend less money.

What are the best areas to live in Cordova?

The Ciudad Jardín area is the part of the city where most students decide to stay. This is because it is close to the University of Córdoba and living there is much more comfortable than being far away and having to travel daily.

Is Cordova safe for international students?

In general, Spain has a low rate of violent crime. Cordova is usually a very safe city, you need not fret there; it is generally peaceful and safe, with no violent criminals. As in any city though, you need to be cautious, especially as a foreigner; a little common sense always goes a long way.

Nowhere is Andalucia’s Moorish-Christian heritage more powerfully on display than in Cordova, with the star attraction being the Mosque-Cathedral, the only building of its kind in Spain. It features a 16th-century cathedral built in the middle of a 10th-century mosque. Other key sights include the Alcázar de los Reyes Cristianos, which is a palace built among the ruins of a Moorish fortress in the 14th century; you will also find a 16-arched Roman bridge and the remains of one of the greatest temples in the Roman Empire.

If you are in Cordova in May, you can experience a festival held nowhere else in Spain. Running for the entire month, the Feria de los Patios showcases the internal courtyards of the oldest houses in the city, colourfully decorated with plants and flowers. Other unmissable celebrations include the processions of Holy Week (Semana Santa), the Crosses of May (Cruces de Mayo), in which flower-strewn crosses appear throughout the city, and the Feria de Córdoba, a week of flamenco, bullfights, eating, and drinking held in late May and early June.

Cordova has an excellent public transportation network. The local transit company Aucorsa provides more than a dozen bus lines covering the entire city. Several lines reach as far as certain suburbs. Displays at bus stops conveniently indicate departure time, line number, and destination of the next available service. As of 2018, a single ticket costs 1.30 Euros. Fares are paid to the bus drivers.

The other way you can get around Cordova is by taxi. Taxis are widely available throughout the city; they are white in colour, with their official number marked on the side door. Fares are based on the meter, which should be available in all vehicles; they can differ during certain hours of the day and during public holidays. Drivers rarely speak English, so either learn some basic Spanish or carry around a map with the destination distinctly circled.

Nearby Student Accommodation In Andalusia