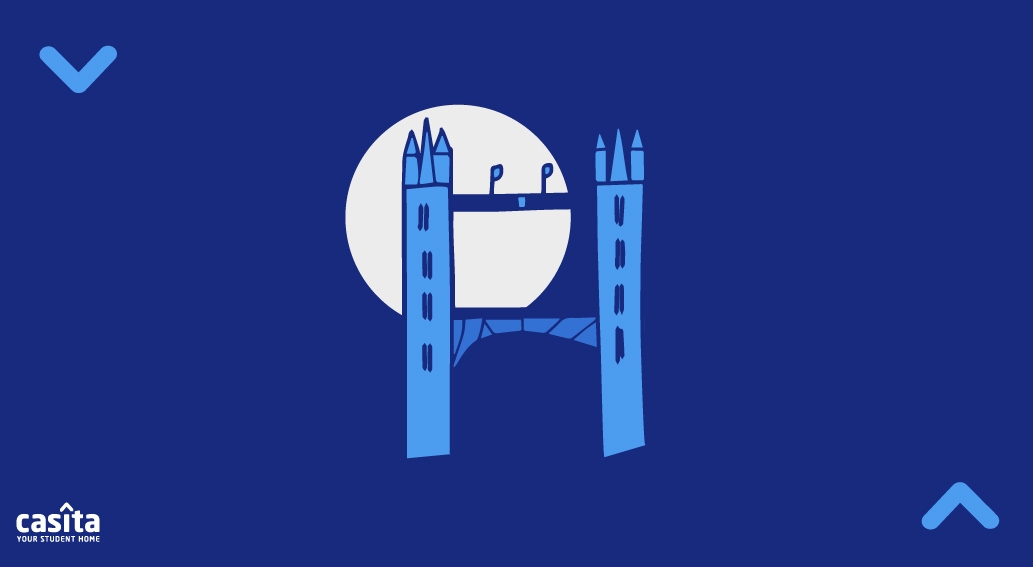 So, are you moving to London in the future and looking for a good neighbourhood where you feel safe, comfortable, and happy? London can easily grant you all of that! Many people choose to move to London because it can be the perfect place to start a new life, progress in your career, and experience a unique culture. Whether you come alone or with family, there are so many opportunities to try different things. In addition to the excellent schools and hospitals, London has a vibrant social scene that takes your breath away. 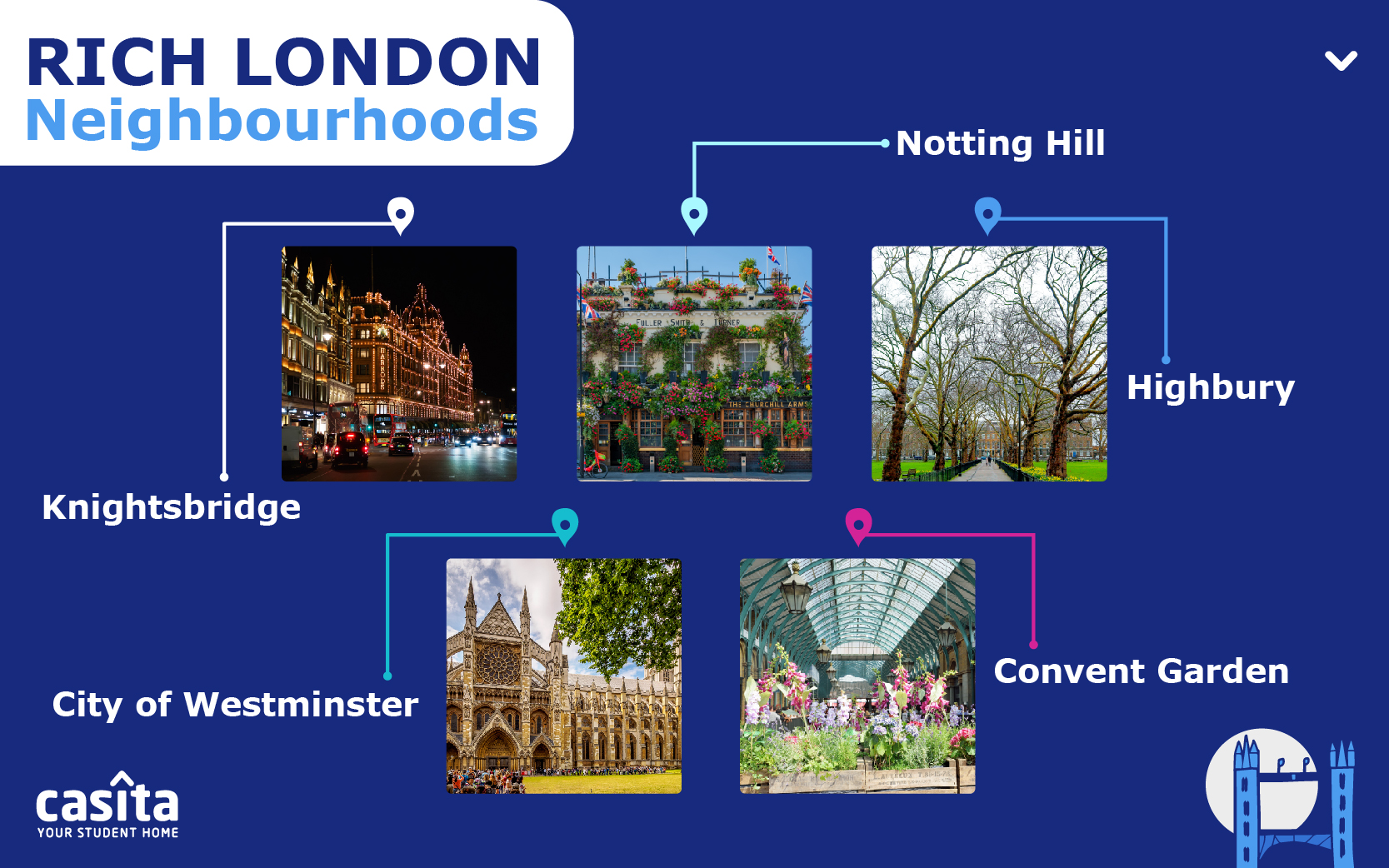 Living in London may come with a high price tag attached, but with some of the city’s most sought-after green spaces, upmarket shopping streets, and world-renowned restaurants on your doorstep, it can be a price worth paying for many. Now that you know how expensive London can get, let’s take a look at some of the richest neighbourhoods in London!

Mayfair is a district in the West End of London, England. It has long been one of the most expensive neighbourhoods in London. Sitting side by side with Hyde Park and Green Park, the balance of open greenery and historic opulence made it one of the most expensive places to live in. The district is bounded by Oxford Street to the east, Piccadilly and Regent Street to the south, and Marylebone Road to the west. Mayfair is also home to the world-famous tailor district of Savile Row. It is also known for its exclusive boutiques, many of which hold a royal warrant. So, needless to say, Mayfair basically has it all!

Kensington is definitely one of the richest neighbourhoods in London. Picture that: a district in the Royal Borough of Kensington and Chelsea in London, southwest of Hyde Park and north of Brompton; it’s pretty self-explanatory! It was originally named after its main thoroughfare (Knightsbridge), but it became more generally known as “Knightsbridge Square” or simply “Knightsbridge”. Kensington also comprises many stately Victorian buildings, most famously the Royal Albert Hall, which hosts concerts of all genres, from classical music to pop.

Throughout the neighbourhood of Kensington, you will find iconic landmarks and institutions, including the Natural History Museum, the Science Museum, and the lavishly furnished Kensington Palace. Kensington simply has everything you can look for in a neighbourhood!

Located in central London, Belgravia is between Hyde Park and Mayfair. It is certainly one of those posh areas in London where you want to have a house in! The district houses many of the city’s most prominent homes, including those belonging to members of the British royal family; very fancy, right? It is also one of the safest neighbourhoods in London, which is a huge plus! Belgravia became synonymous with the super-rich and luxury lifestyle.

Chelsea is one of London’s better-known, wealthy neighbourhoods, and it is easy to see why! Chelsea is an affluent enclave in West London with a legacy of housing artists like the Rolling Stones, The Beatles, and pop icon, Kylie Minogue. Chelsea has all of the hallmarks of your usual wealthy neighbourhood with an artistic side to its street! In this neighbourhood, you’ll find some of London’s most luxurious homes, including those owned by billionaires like Roman Abramovich (who owns one of England’s largest mansions) or Gordon Getty! So, it is really easy to see why people are in love with Chelsea!

If you want to live in Marylebone, you should know that it doesn’t come cheap! The average house price is £1 million (very expensive, right?) It is one of the richest areas in London, which is in the West End of the city. It’s also known for its high number of restaurants and clubs. In addition to the fanciness, the area also comes with a lot of quiet, which is something most people enjoy. So, yes, you’ll be paying a fortune, but you will also live a fancy, calm, and safe life. Not to mention, you will also get to see Baker Street, home of the fictional character Sherlock Holmes, and also Madame Tussauds, the famous waxworks museum!

Lying just south of London’s Hyde Park, the neighbourhood of Knightsbridge is the epitome of luxury! Knightsbridge also plays host to banks that deal with some of the world’s wealthiest individuals, which makes it no surprise that the average house price can be upwards of £2.81 million! If you think that’s it, you’re very mistaken!  Knightsbridge is also home to the world-renowned department store, Harrods, which is a luxury shopping destination with everything from exclusive designer collections by Gucci and Prada to works of art curated by Andy Warhol himself! 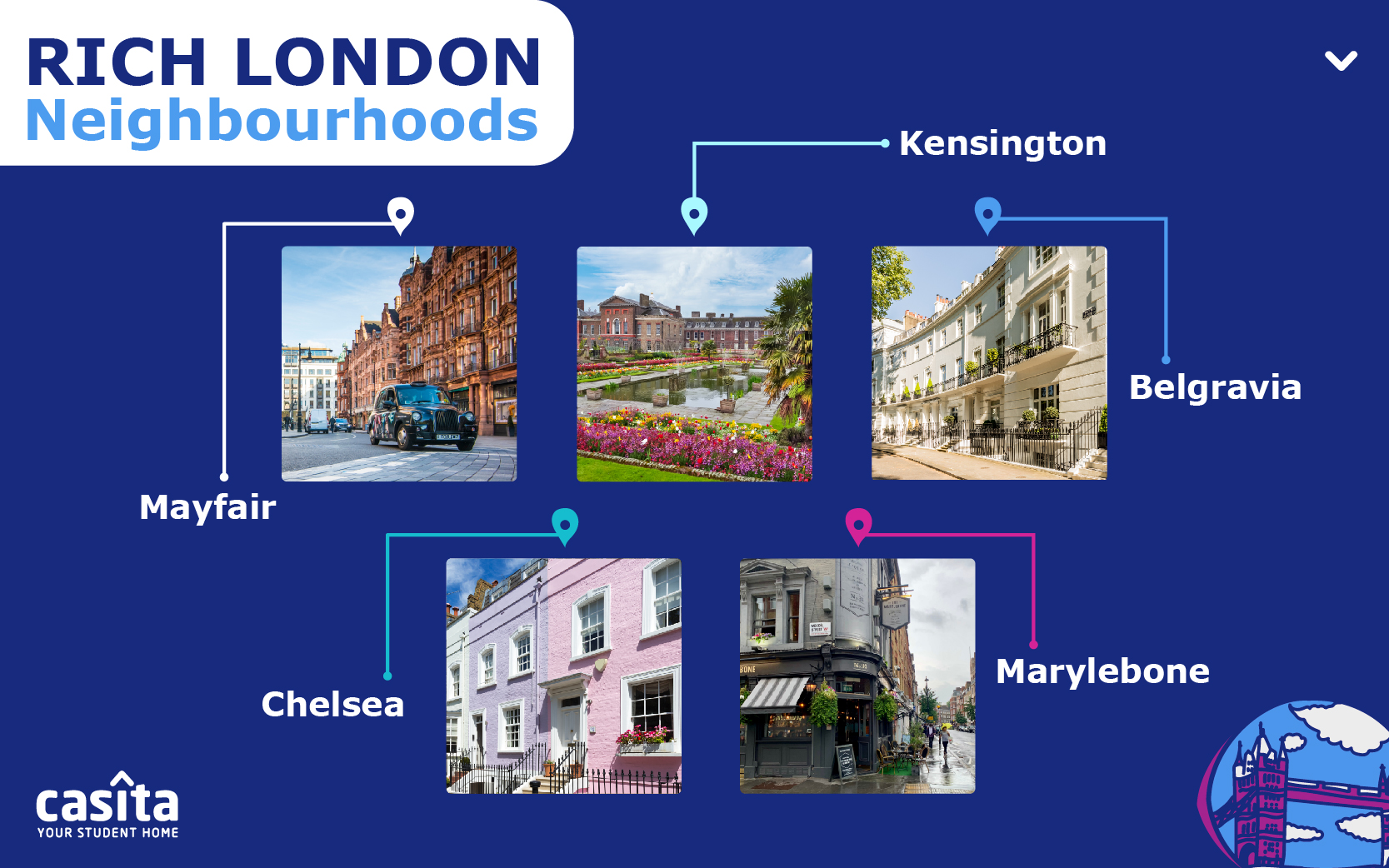 Arguably made famous by the 1999 rom-com, Notting Hill is one of the richest neighbourhoods in London, yet it has not always been this way. The neighbourhood went through a series of gentrification through the 21st century before it became one of West London’s most affluent neighbourhoods. Notting Hill now attracts those who want to live within a wealthy neighbourhood but with a tinge of trendiness and hipness, which results in it having brightly coloured buildings, music venues, theatres, and boutique shops! It’s basically everyone’s dream neighbourhood!

The north London neighbourhood of Highbury stands out as one of the greenest of the affluent London neighbourhoods. Located in the leafy districts north of the city, Highbury has an almost suburban feel to it, adding to its popularity within the wealthy community and giving it a wholesome feeling. Also, it is not far away from the city but far enough to avoid the hustle and bustle of the city. This means that you get the best of both worlds!

This large neighbourhood revolves around a car-free plaza that encourages outdoor arts and performances. Convent Garden is very interesting because people consider it a place you visit rather than a place you live in, which says a lot about the prices! Most notably, Covent Garden is home to the Royal Opera House, one of the most famous institutions in London, which only adds to the economic credibility and wealth of the neighbourhood. The economic boost provided by street entertainers, tourists, theatres, and more, blends perfectly with the range of European restaurants and bars that are scattered throughout the district. This neighbourhood simply has it all!

What if you end up moving to one of these breathtaking neighbourhoods? We know it’s an absolute dream come true! Each and every one of these districts has something unique to offer, which is the main reason why people always consider London when they start thinking about moving or even studying abroad. There are huge diversity and possibilities when you move to London. Not only will you live in the world’s most beautiful city, but you can also live in good, safe, and posh neighbourhoods that will definitely change your life! The city also houses many world-renowned universities and highly-ranked educational institutions, making it even more attractive for both local and international students!

1. What are the most expensive neighbourhoods in London?

The richest and most expensive neighbourhoods in London are definitely Chelsea, Kensington, Mayfair, and Knightsbridge! These neighbourhoods are known for their fashionable and expensive shops and restaurants, as well as being home to many of the richest people in the world.

2. What and where is the most expensive house in London?

London’s most expensive house is a 20-bedroom megamansion in Knightsbridge! This house is currently being sold for roughly £200 million by its billionaire owner, Hui Ka Yan, the founder and chairman of embattled Chinese property developer Evergrande.

3. What is the most famous road in London?

The most famous road in London will have to be Oxford Street. It is one of the busiest shopping streets in England and one of London’s most historic roads too! Once known as Tyburn Street, this stretch of London road from High Holborn in the north to Oxford Street in the west was once the last journey of prisoners heading to the gallows at Marble Arch. 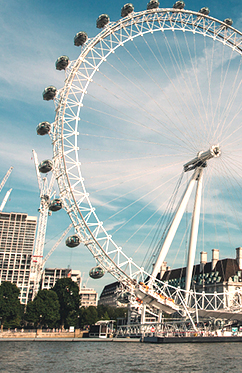