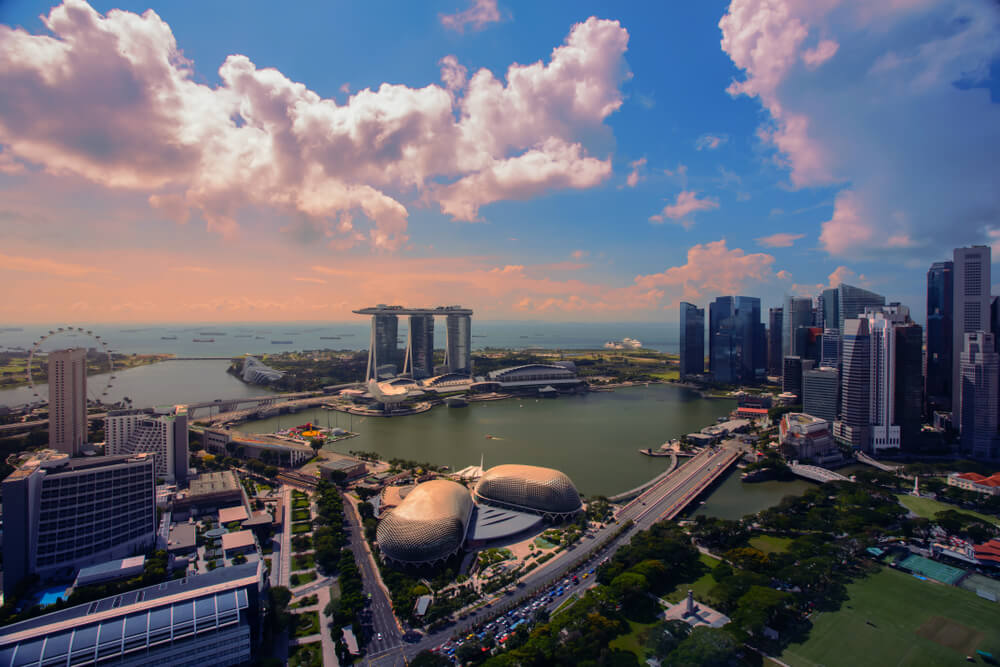 Singapore is one of Asia’s most culturally diverse cities featuring a range of languages and religions peacefully co-existing within the regularly growing metropolis. Its diversity gives the city its unique identity that attracts tourists and students from all around the world. The name Singapore comes from the Malay language and means ‘Lion City’ which has made lions its signature symbol. It’s also known as ‘Little Red Dot’ because of how it appears on many maps of the world.

The Malaysian island is located at the tip of the Malay Peninsula just one degree north of the equator, making its climate tropical all year round. The weather is humid and hot all year, so the seasons aren’t entirely clear. Temperature ranges between 25-31C with January being the coldest month, while April is the hottest. Rain isn’t a stranger to the city, especially in November, so make sure to pack your umbrella and rain boots.

Singapore attracts tourists and students with its famous historical landmarks and the blends of Indian, Chinese, Malay, and Arab cultures in its folds. The British influence adds to its enchanting atmosphere, making it a point where the East meets the West. This shows the most in Singapore’s food scene with an array of cuisines from all around the world. To get to know the full history, head over to the Civic District. It includes the National Museum of Singapore where exhibits of Singapore’s journey are on display, and it also has Singapore’s Art Museum and National Gallery. Iconic streets like Bras Basah. Bugis with its European style architecture, Tiong Bahru featuring the Qi Tian Gong Temple, and Little India with its vibrant shops and restaurants should be on your list for top places to visit in Singapore.

Singapore prides itself with its recent efforts for ‘going green’, and it manifests in its gorgeous Botanic Gardens which earned the city its first UNESCO World Heritage nomination. It’s considered a reserve for Singapore’s natural history and includes a beautiful Orchid Garden, an eco lake and fascinating sculptures. Gardens by the Bay is worth visiting as well with its impressive design and the world’s tallest indoor waterfall giving you a break from the bustling city. Make sure not to miss out on the world’s largest observation wheel, Singapore Flyer, and enjoy the picturesque views. One of the best things to do in Singapore if you’re looking for a weekend adventure is visiting Universal Studios featuring areas dedicated to a specific theme, film, or television show, and it has everything from rides and various dining options, to shopping and live shows.

The city boasts its rising place as a top educational destination for students from all around the world with its two leading universities ranked at the world’s top 10. The National University of Singapore (NUS) and Nayan Academy of Fine Arts are the two top universities in Singapore that are highly acclaimed in Asia and globally as well. Other great universities, if you’re thinking of studying in a student residence in Singapore, are  Singapore Management University and Singapore University of Social Sciences.

One of the great things about Singapore is how easy it is to get around thanks to its efficient public transport systems. The MRT subway system (Mass Rapid Transit) is the fastest way to move all over the city from your student home. It consists of five lines that are colour-coded so that they are easily remembered. Another quick method is the bus system, there are two bus operators; SBS and SMRT, and each one has its own route network. The bus is not only the most cost-efficient way to get around but also the one providing the most stunning scenes. University students can get unlimited bus and train rides for only $85. Many students use the EzlinkCard which quickly pays for any public transport link.