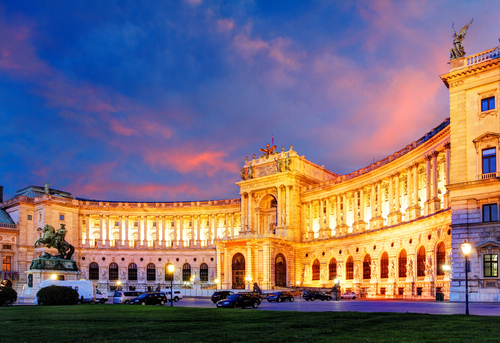 Vienna, Austria is one of the most beautiful cities in European cities; it known for its rich history and culture that is now beautifully displayed as you walk in its cobbled streets. International students make out 10% of the population as the city has high-quality teaching of music, medicine, law, and the arts. The city’s name is claimed to originate from the word vedunia, meaning “forest stream”. Its German name is Wein which refers to its most famous dish, the wiener schnitzel.

Vienna is known for being the city of music, having birthed the most notable musicians like Wolfgang Amadeus Mozart, Ludwig van Beethoven, Gustav Mahler and many more. It’s also famous for being an Imperial city, hosting some of the most wondrous palaces and monuments. Vienna has been ranking as the best place to live for the last ten years for its great infrastructure, safety, and cleanliness. Vienna’s location is a big part of its charm since it lies between the foothills of the Alps and the Carpathians with the Danube river running alongside the city.

One of the things that make Vienna an ideal destination is its overall moderate temperate and mild climate. It has warm summers with little to no rainfall with an average temperature of 21 to 27 °C. The winters are quite dry but very cold with the temperature reaching 5.6 °C and possible snow during November. Packing one or two heavy jackets and a few sweaters is a must if you want to get through the cold winter nights.

There is not a dull moment at this dynamic city. Whether it’s the array of sights to visit or the busy cultural calendar, you’ll always find activities to do in Vienna. During the summer, there’s always a festival or an event to attend or an open-air cinema to enjoy. Winter activities in Vienna are endless; whether it’s ice-skating at City hall, strolling through Christmas markets, or attending an opera performance, there is something for everyone to enjoy.

Taking time to appreciate the Imperial buildings like the Schönbrunn Palace, Belvedere Palace, St. Stephen’s Cathedral is a must to get the full Austrian experience. Schönbrunn Palace, dating back to the 19th century, attracts millions of visitors each year with its gorgeous formal gardens, the Gloriette monument, the zoo, and the Palm House. A city with such a rich history and culture is bound to have some great museums to boast it.  Kunsthistorischen Museum has the largest collection of Bruegel paintings in the world while the Museum of Natural History has 39 exhibition halls of all kinds. Make sure not to miss out on a stroll or a picnic at Volksgarten, also called ‘people’s garden’.

Vienna is a top student destination in Europe for its great academic institutions and high-quality teaching. The University of Vienna is one of the top 200 universities in the world and one of the oldest and largest in Europe. It has 56 Bachelor Programmes, 112 Master Programmes, 3 Diploma Programmes and 8 PhD Programmes. The Vienna University of Technology (TU Wien) is also in the world’s top 200 universities, has eight faculties to choose from, and prioritizes fundamental and applied research.

Vienna is known for its excellent and efficient transport system. There is a subway network, trams, and buses. The easiest way to get around in the city’s centre is Ringstraße, perfect for when you’re moving from your Vienna student home to the top landmarks in Vienna. The most popular transport for students in Vienna is the metro (Ubahn) with five lines taking practically anywhere in the city easily without any hassle. Buses also have lines that take you to most places in the city and are great options if there isn’t any traffic.