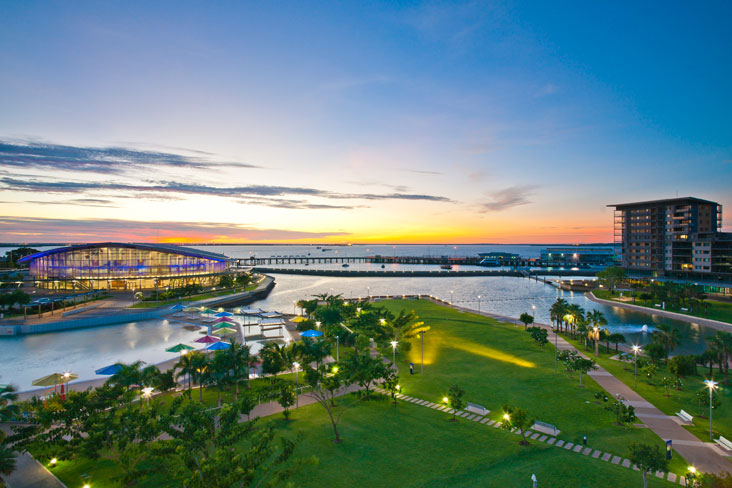 Darwin Etymology - Where Does the Name Darwin Come From?

Derived from an Old English origin “deorwine” meaning “dear friend”. The word “deorwine” probably started off as a term of endearment for a child or as a nickname for a close kinsman.

Darwin is a highly populated city with a strong industrial background. It is the capital of Australia's Northern Territory and a former frontier outpost. It is the smallest, wettest, and most northerly of the Australian capital cities and serves as the Top End's regional centre. Darwin's proximity to Southeast Asia makes it a link between Australia and countries such as Indonesia and East Timor.

It takes 41 hours to get from Darwin to Sydney using a car ride. You can take the Great Southern Rail line to get to Sydney from Darwin.

Why Book Student Accommodation in Darwin?

Famous for its breathtaking parks and sunny beaches, the city is famous among tourists and students looking for a unique experience abroad. It is a vibrant, yet relaxed industrial hub that is famous for being Australia's gateway to Southeast Asia. It is close to various Asian countries, especially Indonesia, Singapore and Manila.

Additionally, Darwin is a gateway to the massive Kakadu National Park. It has a popular waterfront area that has many beaches and green areas like Bicentennial Park. The city also includes the Museum and Art Gallery of the Northern Territory, which are located near the water as well, displaying Southeast Asian and Pacific art, plus a pearling lugger and other seafaring vessels. Darwin is proud of its diverse and multicultural populations, with more than 60 nationalities and 70 different ethnic backgrounds and it is also characterized by its many inspiring cultural festivals and food and craft markets.

Darwin has a tropical savanna climate with distinct wet and dry seasons and the average maximum temperature is similar all year round. Darwin’s average temperature ranges from 24.7 - 32 °C (76.5 - 89.6°F). The summers are actually much rainier than the winters in Darwin! January is considered to be the heaviest month when it comes to rainfall. However, people in the Top End consider the weather in January and February as the most beautiful time of year. The dry season runs from about May to September, during which nearly every day is sunny, and afternoon relative humidity averages around 30%. In the coolest months of June and July, the daily minimum temperature can get as low as  14 °C (57 °F), but it rarely falls below 10 °C (50 °F). However, outer suburbs away from the coast can occasionally experience temperatures as low as 5 °C (41 °F) in the dry season.

What to Pack and Darwin Local Timing

Despite the warmth in Darwin, when having your student accommodation in Darwin, you will need to pack clothes that are suitable for rainy weather, as the annual rainy season runs from October to April. You need to pack some gear to protect you from the water such as rain boots, umbrellas, raincoats, ponchos, and hats. GMT+9:30 is Darwin’s local timing so you should also keep this in mind when booking your travels and student accommodation in Darwin.

Is Darwin Rural or Urban?

Darwin is 86% urban and 14% rural, so that makes Darwin city definitely urban.

What are Some Must-Visit Places in Darwin?

Known for its infamous iconic Sunset Markets. While it might be a suitable beach to walk around and enjoy a relaxing night, Mindil Beach is not a swimming beach as it is the home of a variety of jellyfish and crocs.

It is a wildlife park with crocodiles, water buffalos, lions, and a bunch of other animals.

Another popular attraction, especially among international students, you get to experience a unique adventure, where the only thing separating you from crocodiles, is the cage you are in. So grab your map and search for the crocodile attraction near your student home!

Darwin also has the famous Darwin Festival which is held every August. This festival is a talent show full of life, art, and cultural exploration. Theatrical performances and outdoor concerts are a given here and there is room for a delicious dinner party in the festival park, Civic Park, anytime. You can visit this festival even if you are on a budget as well. Some of the events are free, so it suits everyone.

Choosing to study in Darwin is an exciting opportunity to live and learn in one of Australia's most unique cities. Charles Darwin University is the primary university of the city with campuses located in the Darwin suburb of Casuarina, the city of Palmerston, and the towns of Alice Springs, Katherine and Nhulunbuy. The university also opened a new campus with a business school in 2015 in the Darwin CBD (Central Business District).

Darwin has plenty of public transport options including buses and taxis. You can use the buses by paying per ticket on board or merely by buying a Tap and Ride Card that you can charge with money and tap to a machine inside the bus. There are bus stops near many popular Darwin attractions such as Crocosaurus Cove, Mindil Beach Sunset Market, Museum and Art Gallery Northern Territory, and Fannie Bay Gaol.