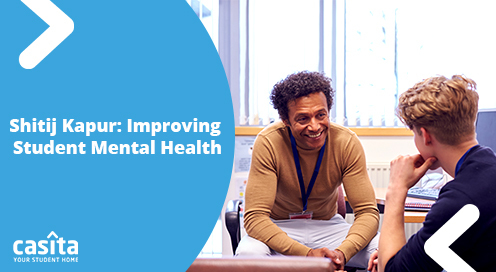 The president and principal of King's College London, Shitij Kapur, has a strong opinion about student mental health. With 35 years of experience in psychiatry and neuroscience, he is the one to know.

According to student mental health surveys, approximately 30-40% of students suffer mental health problems. But, as Kapur points out, this leads to misperceptions. For starters, these students are sick. However, he claims that such surveys "do not pick up what a psychiatrist would label mental illness. They have anxiety problems and are frequently depressed, but they do not have a mental disease." The second misconception is that students have a higher rate of mental health problems than the general population. According to Kapur, studies have proved that this is not the case.

The misconception that students are "snowflakes," or overly emotional and easily offended, is on the other end of the mental health spectrum. Kapur opposes the phrase, which he considers insulting and stigmatizing. “I think it’s very inappropriate,” he said. “People in their 50s and 60s will say, ‘Wow, I went to college too, you know, it was tough, but I never complained,'” he says. But “this generation is facing issues and challenges that those of us now in our 40s, 50s and 60s did not have, even before Covid. [Today’s students are] the post-financial crisis generation. What the financial crisis has done is change the possibilities of your future. He admits young people today are “perhaps a little more worried about the future”, but thinks that’s because they are more worried about society than previous generations. “I find that their situation is different and maybe even more difficult and that they are more sensitive to the realities of the environment and equality.”

Kapur has made improving student mental health one of his top priorities since returning to King's as a leader in June 2021 — he was formerly dean of the Institute of Psychiatry, among other responsibilities.

With funding from the Office for Students, King's collaborated on the development of a new “Education for Mental Health” toolbox with the University of Derby, Aston University, Advance HE, and Student Minds.

According to Kapur, consulting services are insufficient. Starting with the curriculum, support for student mental health should be integrated across the university. He believes that ensuring students are prepared with basic abilities, such as note-taking, from the beginning can help with this.

King’s has experimented with a few approaches, using research from its own academics who have looked at what wellbeing means to students. King's initially offered two credit programmes, one for psychology students and one for nurses, to teach students about mental health resilience using positive psychology; they are now available to all students.

Students at King's will have the same amount of face-to-face time with their teachers as they did before Covid, however, the nature of this may alter. He claims that while conferences can be held online, seminars must be held in person.