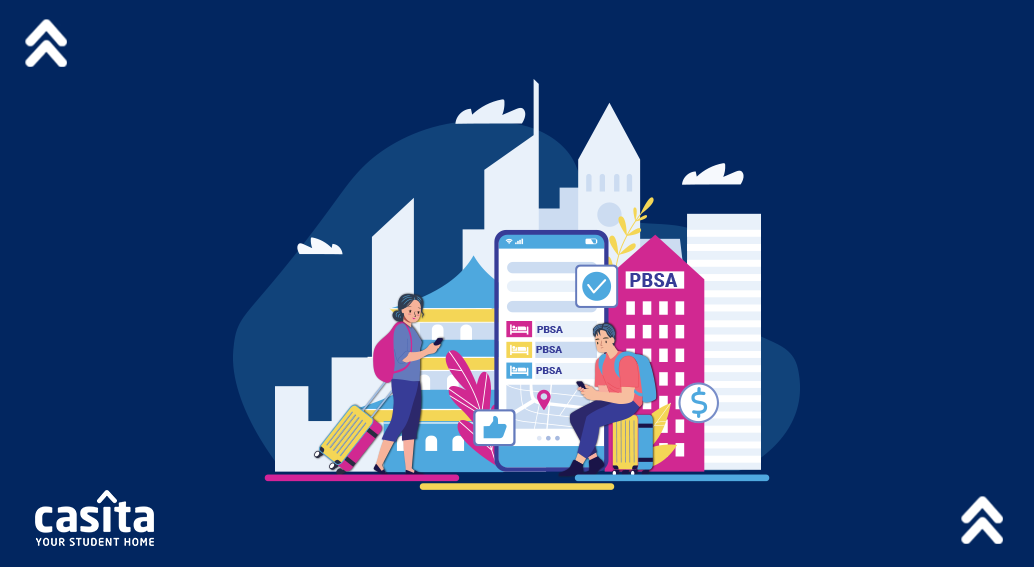 Is UK living costs for students in a number of areas reach a sum of  £16,500 annually, recent research released by Knight Frank reveals that this number is set to increase even further in the upcoming months ahead of an expected rise in rents, bills, and utilities, all of which are a result of the current cost of living crisis.

Conducted by the Global Property Consultancy, a recent analysis of the cost of an all-inclusive en-suite room within a PBSA (Purpose-Built Student Accommodation) versus the cost of a room in a shared house in the UK’s private sector that is marketed toward students found that PBSAs are possibly the most cost-effective options for students in the coming period in attempts to avoid the ongoing cost of living crisis.

On average, the overall cost of a room in a PBSA was found to be lower than the cost of accommodation in the wider private rental market in 80% of the popular student cities. This was the result of mapping popular university cities and towns across the UK, which was done by Knight Frank.

15 towns were analysed for the purpose of this new research and it was found that of the 15, London was the one with the biggest margin of difference in price. The English capital’s stats showed that students living in a PBSA pay less than those living in the wider rental market by around 33%. This is mainly due to the inclusion of bills in the PBSA rent, which allows students to save approximately £108 per week or £5,527 over a 51-week tenancy.

Out of the 15 university cities that were analysed by Knight Frank, only three cities have students that pay more for living in a PBSA than they do if they live in the private rental sector. For example, in Manchester and Southampton, the cost of renting a PBSA is only more expensive than renting in the private rental sector by a small margin of around 4%, which is equivalent to merely around £5-6 per week. Brighton, on the other hand, was found to be the only location out of the 15 where renting PBSA costs significantly more than renting a private property; this increase is estimated to be around 17%, which is equivalent to approximately £29 per week or £1,479 over a 51-week tenancy.

“Further energy cost inflation over the coming months will likely widen these differences; operators of PBSA will absorb much of the uplift and not pass it on to their customers – a luxury that won’t be afforded to students renting in the private rental market. The PBSA sector gives certainty to accommodation costs as the weekly rent includes essentials such as utilities and wi-fi. Often the rent also includes the provision of additional on-site amenities such as gyms and cinemas, which students would of course pay for separately if they lived in private rented accommodation.” Said Neil Armstrong, the Joint Head of Student Property at Knight Frank.

An added comment came from Merelina Sykes, who is the other Joint Head of Student Property at Knight Frank, stating: “With rents, especially in locations such as London, on the rise, and reports that energy prices could reach £4,266 p/a per household by January, students renting in the PRS market are likely going to feel the pinch of the ongoing cost-of-living crisis. With PBSA in most markets already offering significant savings, the benefits will only become crystalised as inflation, rents, and bills rise. That said, PBSA is severely undersupplied across the UK, with delivery in most markets significantly outstripping local student population figures. Therefore we are likely to see stiff competition and long waiting lists for PBSA beds as demand strengthens in light of the current economic climate.”

PBSA operates were found to have dealt better with the challenges presented by the pandemic in recent years than the landlords in the wider private rental market. This was the result of Knight Frank's latest UK Student Accommodation Survey, which was undertaken in partnership with UCAS. As per Knight Frank, around 69% of students living in a UK PBSA, whether university or privately operated, were immensely pleased with the operators’ approach to getting through the pandemic. When it comes to students living in shared houses rented from landlords in the wider private rented sector, only 25% of them agreed that their landlords handled the pandemic and its consequences ideally.

The conclusion came from Matt Bowen, Head of Residential Investment Research at Knight Frank, who said: “There has been a perception in the past that PBSA is more expensive than renting on the private market, but student sentiment regarding the relative value for money offered by PBSA compared to the private rented sector has strengthened over recent years. This has been built on the goodwill developed by operators throughout the pandemic and cost-push inflation on bills in the wider private rented sector. Ongoing inflation is likely to entrench this position and push demand for PBSA from a wider range of students”