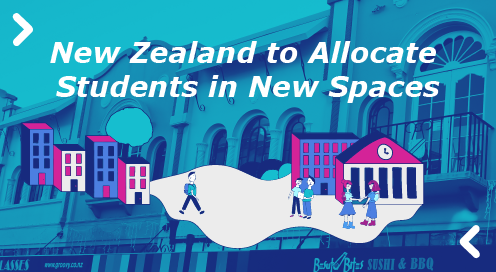 In early February, the New Zealand Government announced that some exempt students would be allowed to return prior to resuming student visa processing in October 2022. Spaces have now been allocated to universities to accommodate returning students. A total of 1,450 spaces have been allocated to universities, 700 to New Zealand’s Institute for Skills And Technology, 850 to Private Training Establishments, and 1,000 to English Language schools.

Chief Executive of Universities New Zealand, Chris Whelan, clarified that although New Zealand’s eight universities could have filled the places in the latest allocations of exemptions on their own, the government wanted to oversee their distribution across the country using a calculation formula to monitor their spreading across all tertiary sub-sectors in a fair way. He also stated that the Universities have their own formula as well, which ensures that the 1,450 available places are distributed fairly based on the number of international students each university had prior to the Covid pandemic.

Schools, English Language Schools, and Private Training Establishments will also need to apply for places from the numerous available education providers, who will then determine which students the available spaces will be allocated to.

The New Zealand Government also announced on March 16th that plans had been brought forward for the country to open its borders to international visitors. Travellers from 60 countries will be able to enter the country on May 2nd without needing to quarantine on arrival, provided they are fully vaccinated.

Whelan hopes that with the Government’s ongoing changes to border restrictions, the limit would be lifted and the 5,000 exempt students would expand to allow any student who can get to New Zealand for a second semester in July and August. He also states that international students should be prioritised for re-entry over others, especially the ones who have already committed to studying in New Zealand.

Thirty-four thousand international students were enrolled in New Zealand universities in 2019, generating a sum of $1.25 bn per year for the country’s economy. However, ever since the country shut down its borders back in March 2020, this sector has taken a drastic hit. For the time being, Chris Whelan is optimistic about students returning in April and how universities are prepared and looking forward to welcoming their students back for a second semester. With the upcoming lifting of border restrictions, Whelan is also hopeful that several other international students could soon be joining them.