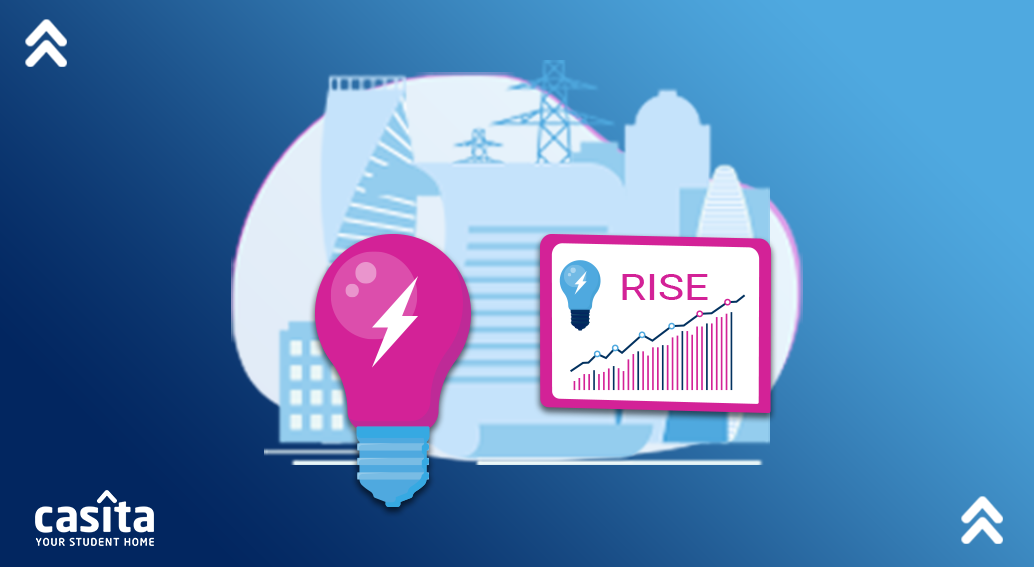 In 2021, the electricity bill in the UK averaged around £764 per year. According to official figures, this number will increase significantly in 2022, with an estimated 2.6X the current rate.

An increase from £1,277 to £1,971 per year for both gas and electric (an increase of around £693 or 54%) is observed in households on default tariffs that are paying by direct debit. This is due to the energy price cap rising on April 1st, 2022. An anticipated further increase of 82% is projected for October.

Assuming said 82% rise in the upcoming October, we’re expected to see costs of 51 p/kWh for electricity and over 13 p/kWh for gas by the end of 2022.

Unit Cost of Electricity per kWh in the UK

Average UK electricity prices per kWh averaged around 18.9 p/kWh in 2021, but will be closer to 51 p/kWh by the end of 2022; this is according to the latest data from the Department for Business, Energy, and Industrial Strategy and based on projections by Cornwall Insight. These projections take location into account, as electricity prices in the UK vary by region.

Most UK households are expected to have a huge financial shock due to the expected 83% increase in electricity prices by October, putting the rate a 51 p/kWh for the last quarter of 2022.

For a number of years, Yorkshire has been known to have the cheapest electricity rates in the country. However, in 2021, residents paid only 4% less than the average electricity cost per kWh.

Historical and Current Energy Prices in the UK

For those paying by direct debit, default energy tariffs will cost around £0.28 per kWh starting April 2022, indicating an increase of roughly 50% compared to last year, with the price cap by the end of March being just £0.21 per kWh.

It is hard to miss the recent rise in energy prices in the past few months, however, it is notable that energy prices have been on the rise for the past few years. Average unit costs experienced a remarkable 67% increase from 2017 to 2021; this is based on the total bills produced by the Department for Business, Energy, and Industrial Strategy.

Electricity generation in the UK is attributed to multiple sources, including natural gas, coal, and renewable energy, with natural gas being the largest contributor to the UK’s electricity. Thus, prices for UK natural gas should be considered when assessing the rise in electricity prices.

The futures prices of natural gas are expected to generally trend down from here in the year, but it will take a few years to return to previous prices, which will not be in favour of people struggling to pay their bills today.

The recent increase in energy prices is mainly noticeable due to the people getting used to lower rates during the pandemic. However, with the increase in demand, the prices increase, which appears shocking, especially coming off of such low pandemic rates.

What is The Reason Behind The Increased Energy Prices?

It is not just the UK that is currently experiencing a surge in energy prices, it is a global problem affecting several countries across the globe. A number of factors contribute to this increase, here are a few of them:

Higher prices are a result of the increased demand for energy caused by the post-pandemic economic recovery.

A hotter summer in Asia and a colder winter in Europe have led to increased energy consumption around the world (e.g. air conditioning in Asia, heating in Europe).

The Russian gas giant, which usually replenishes European storage sites, did not do so as much as normal.

During the pandemic, regular maintenance was not performed as efficiently, which caused supply issues, and project delays, and led to systems being down, among other things.

Rates, however, vary according to your payment method. Despite Northern Ireland topping the charts for the highest rates for those paying with direct debit, residents of Merseyside and the South West paid the highest rates with credit and prepayment.

Standing (Fixed) Charges for Electricity in the UK

How Much You Pay vs How You Pay It

How you pay for electricity (i.e., credit, direct debit or prepayment) affects both your variable unit charges and your standing charges.

What's the cheapest way to pay for electricity?

Direct debit contracts have the lowest variable unit prices on average. This is why paying with a regular direct debit has been and still remains the cheapest way to buy electricity in the UK.

Back in 2017, prepayment meters used to have the highest standing (fixed) charges, costing households an additional £20 more than paying via direct debit per year. However, those paying via credit pay the highest charges for electricity (both variable and fixed). Average variable charges cost 9% more and fixed charges cost 22% more when paying by credit than paying by direct debit. Paying by "credit" is when you get a bill from your supplier which you then pay with a cheque, cash, credit card, etc.

For those looking to save money, direct debit is the payment method of choice due to its history of being the overall cheapest option. They should also avoid paying via credit at all costs due to it being the most expensive option for both variable and fixed costs.

Economy 7 tariffs have cheaper night rates by 41.3% vs. a normal, single rate Standard tariff, but the Economy 7 standing charges are 5.2% higher and the day rates are 16.7% higher. This is for the year 2021, with current and future prices expected to be much higher, in accordance with recent increases.

Does an Economy 7 Tariff Actually Save Money?

Those who could manage so that half of their electricity usage occurred during the 7 off-peak hours, they’d pay an average on 16.6 p/kWh for electricity on an Economy 7 tariff, which is in fact 12.3% cheaper than the Standard rate of 18.9 p/kWh. This is if they keep in mind that while they might be able to run the dishwasher and dryer during the "night" hours which vary but typically run from 11 pm to 6 am, the fridge runs all day and they’re most likely to use lights, the oven, the kettle, and other high-energy appliances during the "day" hours.