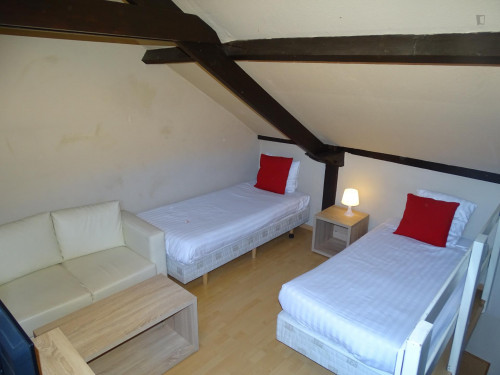 Why Book Student Accommodation in Leuven?

Casita has several options for student accommodation in Leuven near the city’s universities and colleges. Here are some of the available options you can choose from!

When moving to study in a new and foreign city, you probably wonder about what life would look like there. We at Casita are here to answer some of your questions regarding student life in Leuven!

Is Leuven A Good Student City?

With a student demographic of around 50,000 local and international students, Leuven is a great student city. Having been established as a university city in the 15th century while also being home to one of the world’s oldest catholic universities still in existence, Leuven is an ideal place for students to live and seek a quality education.

How Much Money Do You Need to Live in Leuven?

Leuven is generally considered cheaper than other Belgian cities in particular and European cities in general. As a single person, once you’ve secured affordable student accommodation in Leuven, your monthly cost of living should average around 825 EUR.

Is Leuven A Good Place to Live?

Leuven is a quiet university city with a small population and something for everyone. Living in Leuven is considerably much more affordable than in other Belgian cities. Additionally, the city is only a 25-minute train ride away from the Belgian capital, Brussels. The city is a lively hub with a vibrant atmosphere, where several cafes, eateries, and markets can be found, and where festivals, fairs, concerts, and sports events take place all year round.

Leuven is indeed a quaint city, but it does have a lot to offer from museums to cathedrals and gardens, this city is packed with attractions and landmarks, here are a few of the most prominent ones! St. Peter’s Church, which is a testament to Gothic architecture and houses a Museum of Religious Art, is a must-visit historic landmark. Fans of art would enjoy their time at the M-Museum Leuven, which exhibits over 52,000 objects, including sculptures, paintings, photographs, and ceramics to name a few. The city’s most ornate and distinguished attraction is its architectural landmark, Leuven Town Hall, which you can both explore and enjoy a guided tour of. Kruidtuin is Leuven’s botanical garden that houses several plant species in glasshouse enclosures and is open every day and completely free of charge. The University Library is one of Leuven’s most notable attractions with stunning architecture and a Belfry Tower which you can climb and enjoy stunning views of the city from above.

As a student in Leuven, you need to be able to navigate the city with ease. This is made possible by the fact that within the city itself and its immediate surroundings, most places can be reached on foot or via bicycle. Additionally, Leuven has a bus transport network that operates both within and outside of the city. Leuven also has a railway station, with trains heading to different Belgian cities.

Nearby Student Accommodation in Belgium