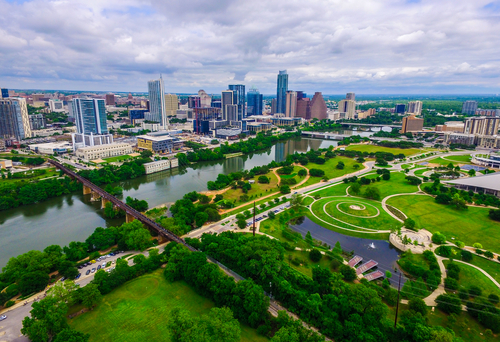 The first thing that comes to mind when it comes to Texas is the live music shows, the hot weather and the best barbeque in the world! Texas is where you either go big or go home! It’s the second-biggest state both in space and population. In fact, it’s larger than Belgium, Germany, The Netherlands, England, Ireland, and Scotland combined! Texas is famously known as the “Lone Star State” signifying its former status as an independent state and as a reminder for its win for independence from Mexico.

Texas is located in the south-central region of the country bordered by the Mexican Gulf and surrounded by many Mexican states from one side and American ones on the other side. It’s a known fact just how hot the weather is in this state. It’s constantly dry and hot along the southwestern border with Mexico. At the same time, the Gulf Coast is humid and hot, so no matter what city you’re heading to, don’t forget to pack the lightest clothes, hats, and sunscreen! The winters get very cold, so make sure you also have heavy clothes and boots.

Wherever your student home is located, you will find multiple places to visit and things to do in Texas as it has many unique attractions. Each city has something different to offer and is guaranteed to give you a unique experience. Austin is known for being the capital of live music, with over a hundred venues hosting free live music shows, which is more than any other state in the country. San Antonio is home to the most famous Texan landmark, The Alamo, where an epic battle took place during the Texas revolution. The city also features a beautiful River Walk along San Antonio River lined with shops and chic restaurants. Houston, on the other hand, has one of the most popular attractions in Texas, Space Center Houston. If you’re studying in Dallas, check out The Sixth Floor Museum, a museum that tells the story of the assassination of President Kennedy. If you’re looking for some summer fun, head over to Galveston where there are the most beautiful beaches along with a Historic District and Victorian-style mansions.

Getting around in Texas is not a hard thing to do, most major cities have local public transportation. Buses are all over Austin while Dallas, Forth Worth and Houston have a bus service called Greyhound. Cycling is the most popular way for students in Texas. The roads are well kept for those who prefer cycling and drivers are usually considerate because the streets are generally small in size. Some universities like A&M provide their own bus service and a Carpool service as well.