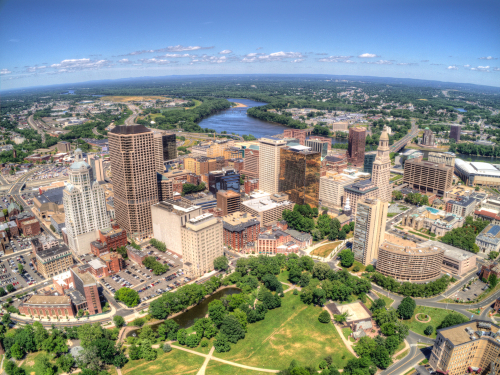 Connecticut is located in the northeastern corner of the USA, and it is one of the most densely populated states in the US. Known as the Constitution State, it is the place where the first-ever recorded constitution was written, the 1439 state government-establishing Fundamental Orders of Connecticut. Hartford, located in the north-central part of the state, is the capital of Connecticut, and it is surrounded by Massachusetts to the north, Long Island Sound to the south, Rhode Island to the east, and New York to the west.

If you intend to stay in a student residence in Connecticut, you will have multiple places to visit in the state. You can visit the Mystic Seaport Museum where you can find centuries-old ships and the Mystic Aquarium, where you can find the beluga whale exhibition. Yale Peabody Museum of Natural History is another Connecticut attraction worth checking out, it is located within Yale University, and it exhibits multiple items from the common Native American culture like Blackfoot, Apache, Sioux, Cheyenne, Crow, Navaho, and Zuni. Connecticut also has the oldest public library in the history of the USA, The Scoville Memorial Library. It was opened in 1771 and is still operating in Salisbury.

Connecticut has multiple transport links to allow you to visit the cities inside the state. There is a Statewide bus, connecting Hartford, Stamford, Norwalk, Bridgeport and New Haven as well as CTfastrak, a new bus service that connects New Britain City with Hartford. The railway's service cover inside and outside transportation to other states. Metro-North Railroad and New Haven Line connect multiple cities with New York City with branches servicing NewCanaan, Danbury, and Waterbury. Shore Line East and New Haven-Springfield Line connect New Haven with numerous other towns like Springfield, servicing almost all the cities between New Haven and New London. Connecticut also has Bradley International Airport, only 15 miles north of Hartford as well as a couple of regional airports like Tweed New Haven Regional Airport, Waterbury-Oxford Airport, and Danbury Municipal Airport.