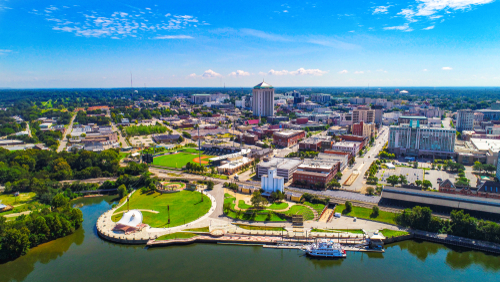 Ranked as the 24th in population, Alabama is the 30th largest state in the USA. It is well-known for its attractive views and remarkable food, in addition to the outstanding institutions of higher education. The country is located in the southeastern region in the USA, bordered by the states of Tennessee to the north, Georgia to the east, Florida to the south, and Mississippi to the west. Thus, it is surrounded by a wide range of geographical land features, including the majestic Appalachians Mountains, plains at sea level, several rivers, and a coastline along the Gulf of Mexico

It is a state that has strong historical and cultural global ties. Moreover, when it comes to food and most living expenses, Itis one of the lowest in the USA compared to other states.

Generally, Alabama has a humid subtropical climate, with short, relatively mild winters and long, warm summers. The average annual temperature is 64 °F (18 °C), being mid-50s °F (10 °C) during the winter and over 90 °F (32 °C) during the summer.

In your spare time, you can enjoy art and music festivals, play sports (such as race car driving, golf, rock climbing, and biking ), or visit other state attractions (such as gardens, beaches, state parks, zoos, aquariums, and amusement parks).

The most important landmarks in Alabama include the Helen Keller birthplace at Tuscumbia, the Space and Rocket Center at Huntsville, the White House of the Confederacy, the Alabama State Capitol, the Civil Rights Memorial, the Rosa Parks Museum & Library, the Shakespeare Festival Theater Complex in Montgomery, the Bellingrath Gardens at Theodore, and the Gulf Coast area.

Having over 50 colleges and universities with a large number of campuses offering real study opportunities, Alabama is considered one of the best destinations for students with some of the best student housings. It is attracting an increasing number of international students over the last several years, with an average growth rate of 12.4%. Main academic institutions currently accepting international students in Alabama include Auburn University, the University of North Alabama, and the University of South Alabama.

Alabama interstate highways connect the state to the rest of the country, allowing you to conveniently and affordably move from one state to another using either a car or a long-distance coach. Another affordable means of transportation in Alabama is the Amtrak train network. It has three Amtrak stations on the Crescent route that travels between New Orleans and New York City: Anniston, Birmingham, and Tuscaloosa. Also, if you prefer to travel by air, there are four airports extended throughout the state, connecting you to the major hubs in the region.