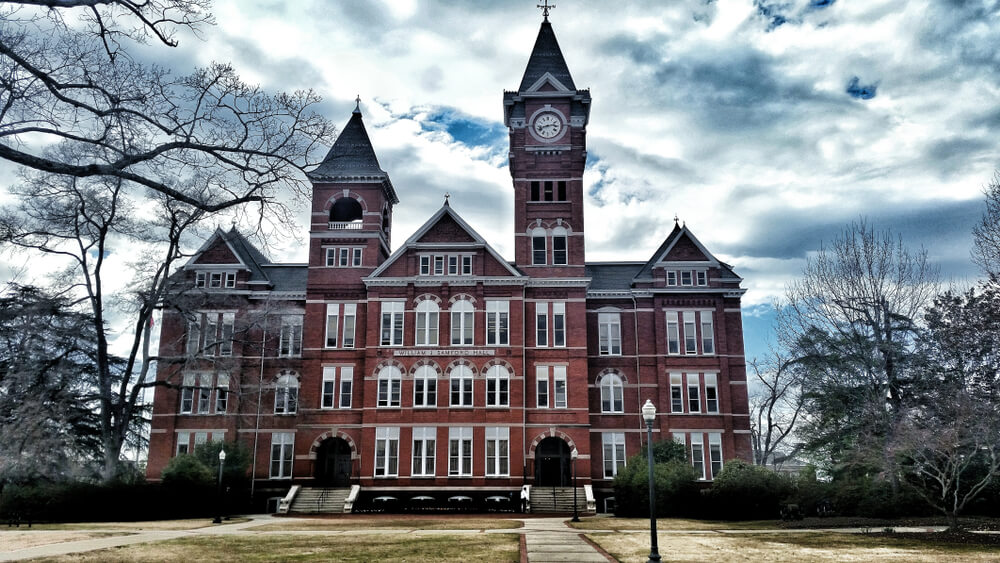 Auburn, a historic college town in Alabama, is one of the largest cities in the state. Nicknamed "The Loveliest Village On The Plains," the city is known for its lovely nature and stunning plants. It ranks amongst the best places to live in the United States since 2009, and it is a famous student hub as it hosts Auburn University. In 2018, the estimated population of the city was approximately 65,738.

Summers in Auburn are hot and humid while winters are short, cold, and wet. The sky is cloudy throughout the year, and temperature typically varies from 38 F to 91 F. Warm temperatures usually starts late April throughout the city and lasts till early June with an average temperature throughout October and September.

Places that attract students in Auburn are plenty, including the sprawling Donald E. Davis Arboretum with its native and unique plants, The Jonathan Bell Lovelace Museum inside Auburn University, and Jule Collins Smith Museum that hosts art collections from the 18th century till the 21st centuries. If you are studying in a student housing in Auburn, you must visit South of Auburn is Chewacla State Park, a 696 scenic acres park that offers plenty of rest, relaxation and recreation ground. Tuskegee National Forest is also worth a visit, you can catch a glimpse of a charming wild deer running around the forest while strolling around.

Interested in the best festivals in Auburn, you can catch a glimpse of some of the best shows in 2020 Auburn Music Fest, a festival that offers a perfect blend of music, food, and culture. The international food court inside is an ideal place for international students; you will get a taste of countless gourmet foods from all over the world. Sweet Auburn Springfest and Auburn Chili Fest are few of the other festivals worth checking out. As a student volunteering in one of these events might be a good idea to immerse yourself more in the culture of the country as well.

Finally, Auburn has plenty of transportations that you must know of. The Auburn University Regional Airport is the general aviation airport along with significant airports located nearby like Atlanta International Airport and Birmingham–Shuttlesworth. Students at Auburn University can also use the Tiger Transit bus system to travel to and from the university. If you wish to share a ride as well, you can use Hail-a-ride apps like Gata Hub.